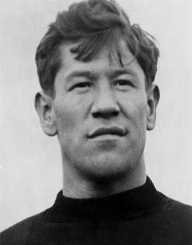 Jim Thorpe was born on May 28th, in 1887. He was a famous athlete who made the best out of his career to finally bag home an Olympic gold medal. However, his medals were later revoked on a technicality.

James Francis Thorpe alias Jim Thorpe was born on May 28th, in 1887. His birthplace was in Prague, Oklahoma. He was born to Hiram Thorpe and Charlotte Vieux. His parents were from different races, and therefore he had to be brought up as a Fox and a Sac.

It is while taking his classes at the Carlisle Indian Industrial School that Jim Thorpe took his athletic career seriously. Besides this, he also tried his luck in baseball, football, and dancing. Surprisingly, he emerged the winner during the 1912 inter-college dancing competitions.

In 1911, he earned himself high acclaim in the different sports that he competed in. His defensive back abilities impressed many. Also, he won the love of many fans as a placekicker, punter and a running back.

After pentathlon and decathlon were introduced in the 1912 Summer Olympics, Jim Thorpe participated in the new competitions. He went ahead and won in three of the competitions. Thorpe also participated in high and long jumps during the Olympics. Similarly, he also tried competing as a javelin thrower where he was ranked third.

Jim Thorpe wedded three times during his lifetime. In all his marriages, he had a total of eight children. Nonetheless, one of them passed away during childhood. His first marriage was to Iva M. Miller. The two had crossed paths in Carlisle. The two lovebirds went ahead and had four children together. Unfortunately, they went separate ways in 1925.

The following year after divorcing his first wife, Thorpe wedded Freeda Verona. The two exchanged their vows on September 19th, in 1905. This marriage also ended in divorce in 1941. Thorpe also had four children in his second marriage. His last marriage was to Patricia Gladys Askew in 1945. The couple lived together until Thorpe died.