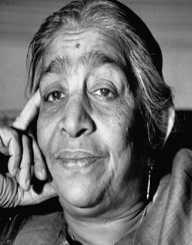 Sarojini Naidu was born on February 13, 1879, in Hyderabad, India. Her parents were Barada Sundari Devi ad Agorenath Chattopadhyay. She also had several younger siblings, including Birendranath, Virendranath, and Harindranath.

As a child, Sarojini Naidu was already highly intelligent. She was much smarter than many of her peers, so much so that she was considered a project. Although her parents urged her to use her talents for math or science, Naidu fell in love with poetry and chose to pursue that instead.

Naidu was only 12 years old when she was first accepted into Madras University. She went to King’s College in London when she was 16 years old. She later attended both Girton College and Cambridge University. While at college, she studied writing, poetry, and several languages (English, Urdu, Bengali, etc.).

Sarojini Naidu is in part known for her beautiful poems. One excellent quality of her poems is that the lines have a fascinating rhythm. Her poems would likely make melodious songs if they were to be put to music.

Several years after finishing up her college education, she published her first collections of poems in 1905: The Golden Threshold. Her next collection of poetry was released almost a decade later and was called The Bird of Time.

In 1916, Naidu wrote her first book, a biography of her good friend (and social justice advocate), Muhammad Ali Jinnah: The Ambassador of Hindu-Muslim Unity.

Some of her most famous poems and poetry collections are listed below:

The Wizard Mask, A Treasury of Poems, The Broken Wing, In the Bazaars of Hyderabad, The Magic Tree, The Snake-Charmer

Sarojini Naidu was a prominent member of the Indian Independence Movement. She first joined the movement in 1905. While in his group, she made friends with the famous Gandhi and Muhammad Ali Jinnah, both of whom she would work with for social causes later in life.

A decade later, in 1915, she began traveling around India. While traveling, she gave speeches on things like women’s rights, welfare, violence prevention, and nationalism. She finished her tour in 1918.

In 1919, Naidu joined the Non-Cooperation Movement. In this movement, she again worked alongside Gandhi. Later in the same year, she became an Ambassador to England through the Home Rule League.

Committing even more to social change, Sarojini Naidu started working for the East African Indian Congress as a delegate in 1924. The next year, she was made the President of the National Congress. In 1931, Naidu was involved with another social justice movement called the Round Table Summit.

In 1942, Naidu was a part of the Quit India Movement. Along with Gandhi, she was arrested for this. She was imprisoned for two years. Once out of jail, she didn’t quit on trying to make social changes. A few years later, in 1947, she worked as the Governor of the Uttar Pradesh.

Sarojini Naidu married Muthyala Govindarajulu in 1898. The couple had five children together: Jayasurya, Leelamani, Nilawar, Padmaja, and Randheer. The marriage between Naidu and Govindarajulu was complicated at first due to several reasons.

One of the reasons it was complicated was because Govindarajulu was Naidu’s college professor. They also belonged to different Indian caste levels. At the time of their marriage, inter-caste marriages were illegal. However, since they got on so well, the matter was not pushed, and neither member of the couple ever faced legal trouble when it came to their marriage. Their marriage only ended with her death.

Sarojini Naidu died on March 2, 1949, in Lucknow, Uttar Pradesh, India. The cause of her death was a heart attack. She was 70 years old when she passed away.