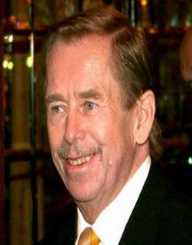 Apart from his political life, Havel was also a poet and an author of plays, memoirs, and essays.

Vaclav Havel was born on 5th October 1936. Having grown from a humble background, Havel faced many challenges during his early age. Despite his limited education, Havel made his name through playwriting. Some of his early work included The Memorandum and The Garden Party.

Most of his work was based on the criticism of the communism.

Showing his dissatisfaction on paper was not enough for Vaclav Havel, he participated in Prague Spring that invaded Czechoslovakia.

He later helped in the formation of Chatter 77 and many other dissident initiatives that aimed at putting the government of the day at check.

Havel's activities did not go well with the government of the day. He was put in prison several times, the longest one being the four years imprisonment from 1979 to 1983.

After he was released from prison, Vaclav Havel formed a party, Civil Forum, which later played a significant role in the Velvet Revolution, a movement that pushed out the communists in Czechoslovakia.

He became president shortly after the fall of the communists. After the independence of Slovakia, an election was done in the Czech Republic, and Vaclav Havel won by a landslide.

His policies such as the opposition to Slovak independence and his term often did not go well with the larger population of Czech citizens.

Vaclav Havel's controversial policies and stands had earned him popularity internationally compared to his home country.

He continued to support various initiatives such as The VIZE 97 Foundation and later Forum 2000 annual conference.

Until his demise, Havel supported the Czech Green Party.

Vaclav Havel was accorded a number of awards for his work including the Presidential Medal of Freedom, Ambassador of Conscience Award and Four Freedoms Award.

Vaclav Havel passed away on December 18th, 2011 at his home in Hráde?ek. His requiem mass was held in Saint Vitus Cathedral. His ashes were kept in the family tomb in Vinohrady.