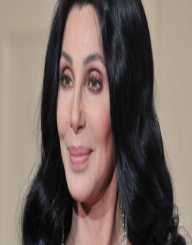 Known as the Goddess of Pop, Cher has had a remarkable influence on the pop culture in her legendary career. She is a Golden Globe-winning performer most famous for her duet Sonny and Cher which she formed with Sonny Bonno.

Cher was born as Cherilyn Sarkisian on May 20, 1946, in California, El Centro, U.S. She was raised by her mother Georgia who was working multiple jobs and had difficulty in maintaining a household. Cher was therefore placed in foster care for some part of her.

From an early age, Cher was interested in arts and music. Acting appealed to her.

Cher started performing at an early age, and in 1962 at the age of 16, she was doing the backup singing. One of the songs to feature her as a backup singer is Be My Baby. It was around this time that she was introduced to Sonny Bonno, who decided to work with her.Two years later, this working relationship turned into marriage.

Cher and Sonny released their first hit single together titled I got you, babe. The duo famously known as Sonny and Cher went on to release many top songs in the coming years.

Cher released several popular songs that include Gypsies, Tramps & Thieves, Dark Lady, and Half Breed. Mainly focusing on the rock and pop genre, more singles reached the top charts. They include The Beat Goes On; Baby Don’t Go, Little Man, and What Now, My Love.Her song Bang Bang reached the Top 5 on the Billboard charts.

While Cher focused on rock tracks in the 80s, she took a detour from the genre and released dance hits in the 1990s. These songs also featured her in very few clothes, so few that sometimes, her music videos were shown only during late nights.

Cher also tried her hand at acting in theatre. She appeared in plays like Come Back to the 5and Dime, and Jimmy Dean.

In 1983, Cher appeared in the film, Silkwood. She also made an appearance in the 1985 film Mask. Becoming increasingly interested in acting, Cher did the films Suspect, and The Witches of Eastwick in 1987. Her role in Moonstruck won her an Oscar.

In 1989, Cher released an album titled Heart of Stone. It featured songs like If I could Turn Back Time and Just like Jesse James.

Cher published her memoir The First time in 1998.

In the new millennium, Cher has mainly focused on music. She released a studio album Living Proof in 2002. After that, she became interested in tours and concerts. Her 2003 tour brought her three Emmy awards.  In 2005, her tour generated more than $200 million.

For three years from 2008 to 2011 she did the Cher at the Colosseum Concert Series in Las Vegas. In 2010, she starred with Christina Aguilera in the movie Burlesque. The movie had moderate success.

Cher married her singing partner Sonny Bonno on October 27, 1964. She was only 18 years old, and Sonny was much older. Their marriage lasted nearly 11 years during which they also hosted a show Sonny and Cher Comedy Hour. This marriage produced her a son, named Chaz Bono. After separating from Bonno, Cher married Gregg Allman on June 30, 1975. They had a son named Elijah Blue Allman.

This marriage was a short one, and they soon separated ways. Since then, Cher has been romantically linked with many Hollywood personalities, including Tom Cruise.