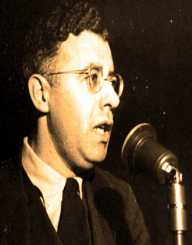 Saul Alinsky was a writer who was considered as a founder of modern community organizing. He was also a political activist.

Saul David Alinsky was born on 30 January in 1909, in Chicago, Illinois. Saul’s father, Benjamin Alinsky was a Russian Jewish immigrant, and mother Sarah Tannenbaum Rice was the second wife, who was also from Russia.

Saul had two older half-brothers, but he was the only son born to Sarah.

Saul Alinsky was raised in a strict Jewish orthodox family, and he went to Orthodox Yeshiva to learn the teachings of Rabbi Hillel.

He rebelled at the age of twelve, fearing that his parents would force him to become a rabbi. Saul would still recognize himself as Jewish, and his religious view was agnostic.

When Saul Alinsky was in Chicago, Saul attended Marshall High School. When he was thirteen years old, his parents divorced. Saul and his father moved to California and continued his education at Hollywood High School. He graduated high school in 1926.

Saul Alinsky majored in Archeology while studying at the University of Chicago in 1926. Where he first gained a Bachelor in Philosophy, and then a doctorate in archaeology around 1932.

Due to the Great Depression, Saul’s dream to become an archeologist was dashed. Instead, he worked as a sociologist for the Institute of Juvenile Research.

After finishing his graduate work, Saul worked at Institute for Juvenile Research, under Clifford Shaw in the State Penitentiary.

Saul Alinsky went to work as a criminalist for the State of Illinois in Chicago around 1936. He began working for Congress of Industrial Organizations (CIO) as a part-time labor organizer. In three years, he became more active in general community organizing, uniting unhappy people to form a protest.

Saul Alinsky turned his attention to help Back of the Yards neighborhood in Chicago. With the help of John L. Lewis, Saul founded Industrial Areas Foundation (IAF). The focus of IAF was to train community organizers, to expand his to help organize community projects around the nation.

His foundation remains active, with affiliates in twenty- one states, and in Canada, Germany and United Kingdom.

Saul Alinsky published his first book in 1946, entitled Reveille for Radicals. The book contained his tactics for community organizing.

After that, Saul devoted most of his energy to improving life of African- American people socially and economically, drawing ire from many governments.

He was banned from Oakland City Council after San Francisco Bay Area Presbyterian requested for his aid to help its ghettos there.

By the late 1960s, the Black Power movement was in full force, so Saul was no longer needed. He then turned his sights on white communities, forming Citizens Action Program (CAP) around 1970.

Saul Alinsky aim was to turn the poor and the struggling middle class against large corporations. As he believed that all societal problems were interrelated, it was impossible to address them individually. Hence a revolution is needed to overcome all the issues at once.

Saul’s Rules for Radicals was published in 1971; it was his most famous work, containing guidelines for future community leaders and organizers.

Many leaders adopted his teachings. The tactics that he taught in the book remain effective, especially in grassroots political organizing.

No politician can sit on a hot issue if you make it hot enough.

Saul Alinsky met Helene Simon at the University of Chicago; they were married in 1932. The couple had two children together.

Helene drowned in an accident in 1947 during a holiday. Saul later married Jean Graham in 1952, but they divorced in 1969.

He was cremated, and his ashes were stored at Mt. Mayriv Cemetery, now part of Zion Gardens Cemetery.

Saul Alinsky was awarded the Pacem in Terris Peace and Freedom Award in 1969. It was presented by the Diocese of Davenport to celebrate an encyclical by Pope John XXIII.