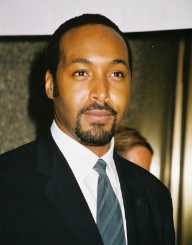 American actor and singer Jesse L. Martin was born Jesse Watkins on the 18 January 1969 in Rocky Mount, Virginia. His parents were Jesse Reed Watkins and Virginia Price who divorced when he was young. After his mother's remarriage, Martin took on his stepfather’s surname.

During his school years, Jesse L. Martin took part in a drama programme to help with his extreme shyness. Acting gave him confidence, and he lost the shyness and became interested in drama and the theatre.

Martin was a pupil at the Buffalo Academy for Visual and Performing Arts and then enrolled at the Tisch School of the Arts at New York University.

As a student, Jesse L. Martin found in roles soap operas to support himself. He then toured with The Acting Company, run by John Houseman. His Broadway debut was in Timon of Athens. He later appeared to the Government Inspector. After meeting playwright Jonathan Larson, Martin looked in his musical Rent (1996). The show was a success, and Martin won critical praise for his role as Tom Collins, a geeky, gay professor. When Rent was staged in the West End (London), Martin was one of the original cast members to act in the show (1998).

Jesse L. Martin was one of the most extended standing cast members of the television series Law & Order. He played the role of Detective Ed Green from 1999 until 2008. He took a break during the 2004/2005 season during which time he worked on a film adaption of Rent. Martin also performed at a special benefit concert where the original cast of Rent reunited for a one-off performance.

Martin was The Philanthropist (2009). In 2010 Martin took part in The Public Theatre’s Shakespeare in the Park appearing at the Delacorte Theatre, Central Park, New York. He played the role of Gratiano in The Merchant of Venice and King Polixenes in The Winter’s Tale (June -August 2010). Martin also appeared on Broadway as Gratiano in The Merchant of Venice. In 2012 he again took part in Shakespeare in the Park looking on Romeo & Juliet at the Delacorte Theatre. Other appearances include Secret Lives of Husband and Wives (2013), The Philanthropist (2009), Smash (2013), Sofia The First (2016) and Flash (2014-2017).

Jesse L. Martin is artistic and his hobbies including drawing and painting.