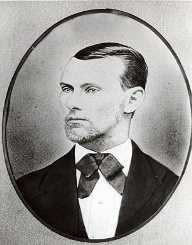 Frank James was born on the 10 January 1843. He was the older brother of the famous outlaw Jesse James. His parents were Zerelda and Robert James.

In May 1861, Frank James joined Governor Claiborne Fox Jackson Home Guard. He fought at the Battle of Wilson’s Creek, but when he fell ill with measles, he had to remain behind. Union Forces then captured James. After taking an oath of allegiance to the United States, he was instructed to return home. Instead, James later joined a group of guerrilla raiders, one of whom was Bloody Bill Anderson. They were involved in various battles against Union troops. After the Civil War ended, he returned home.

At some stage in the late 1860s, the James brothers turned to crime, and by the end of the decade, they were involved in bank robberies and some murders. This pattern continued into the early 1870s. In the mid-1870s, the brothers moved to Nashville, Tennessee and lived under assumed names. Frank James changed his name to B.J. Woodson and lived quietly with his wife Ann and son Robert raising animals and racing horses. He was content with his quiet life until his brother talked him into returning to a life of crime.

After his brother Jesse was killed by one of the younger gang members in 1862, Frank James gave himself up in Jefferson City, Missouri. He was found not guilty of the crimes he was accused of in Missouri and Alabama.  He spent his later years doing a variety of jobs and eventually returned to the family farm after his mother’s death in 1911.  Frank James died on the 18 February 1915.