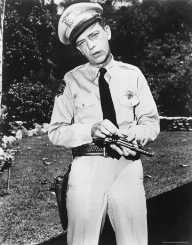 Jesse Donald Knotts was born on 21st July 1924, to William and Elsie Knotts. He was born in West Virginia, United States, in a town called Morgantown. He had three older brothers. Knotts’ father was a farmer who had a nervous breakdown and had a mental illness, due to the late arrival of Knotts. Knotts’ mother was 40 when he was born, and his birth caused emotional stress for his father.

Don Knotts’ father died from pneumonia when Knotts was 13. His mother raised the four boys and ran a boarding house at the same time.

Even at this young age, Don Knotts had already started performing as a comedian and ventriloquist at church and school functions.

Despite his troubled childhood, as his father was a schizophrenic, Don Knotts graduated from Morgantown High School. He enrolled in university, but when World War II broke out, Don Knotts enlisted in the Army. After his service finished, he returned to study and graduated in 1948 from West Virginia University with a Bachelor Degree in Education.

After high school, Don Knotts went to New York City to pursue a career as a as a comedian. Unable to make an impression, he returned home. Don Knotts served in the US Army from June 1943 to January 1946. He was awarded several medals during his military career, but more importantly, he made connections that would help him get the break he needed to start performing. Don Knotts performed on radio for a time, until his major television break came in 1953 when he joined Search for Tomorrow, a popular soap opera. He remained with the show until 1955. In 1956 he joined Steve Allen’s, Variety Show. Don Knotts’ showed his versatility by performing on Broadway in the production of No Time for Sergeants, which ran from October 1955 to September 1957. In 1958, he acted in the film version of the show.

During filming, Don Knotts met Andy Griffith. Griffith was given his show, The Andy Griffith Show, which ran from 1960 to 1968. Knotts performed as Griffith’s sidekick, Barney Fife. He remained in the role for five years.

Throughout the 1970s, Don Knotts was never without work. He continued to make regular guest appearances on different television shows, and in the mid to late 70s, acted in several comedy movies.

Don Knotts had previously been a part of the television series, Three’s Company, and in 1979 he returned to the program. He stayed with the show until 1984 when it finished airing.

Don Knotts continued to work through the 1990s, but his appearances were less often.

During his career, from 1958 to 2006, Don Knotts acted in or performed voice-overs in 30 films. He was in 58 television series and did voice-overs for several animated movies.

Don Knotts won many awards, including five Emmys for his role in The Andy Griffith Show.

He was also awarded a star on the Walk of Fame on Hollywood Boulevard.

Don Knotts’ married three times throughout his life. His first marriage was in 1947 to Kathryn Metz. They divorced in 1964, but during their marriage, they had two children, a son, Thomas, and a daughter, Karen.

In 1974 he married Loralee Czuchna, and they were together until 1983. He married Frances Yarborough in 2002 and was still with her at the time of his death.