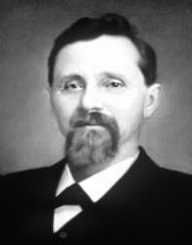 Andrew Taylor Still was born on August 6, 1828, in Lee County, Virginia, USA. His parents were Martha and Abram Still. He also had several siblings.

In 1853, when Andrew Taylor Still was 25 years old, he began to study medicine. Like many aspiring doctors of the time, he did not attend an actual medical school, but instead self-taught by reading medical books. He continued to study throughout most of his life, but he started his career in the late 1850’s. He first treated common ailments and then moved on to more complicated issues.

In 1861, the American Civil War broke out. Andrew Taylor Still did not fight in the war, but he worked as a physician for the Confederate army throughout the war. He focused on illnesses, which killed more soldiers than bullet wounds did. Of course, he did try to heal wounds as well. Seeing the destruction that illness caused by the war Still vowed to focus on medicine even more after the war.

After tragedy struck his family, Andrew Taylor Still decided to dedicate his life to improving the world of medicine. He believed that many illnesses and diseases could be cured by adjusting the body, as well as using medicine. The practice of this was later called osteopathy.

In 1870, he enrolled in a medical school for the first time. He attended the College of Physicians and Surgeons. While at the school, he studied various kinds of known medicine. He also put in the research to study new types of medicine--the osteopathy he so deeply believed in. His research would later lead to new methods of bone setting. He did not put much research into new medicines, though. His main research thesis stated that illnesses and diseases could be treated without medicine. Many people in the medical community did not believe these ideas, which made it extremely difficult for Andrew Taylor Still to continue his career in medicine.

In 1874, Andrew Taylor Still moved to Virginia to practice medicine without fear of his reputation following him. He started gaining a positive reputation again, as his new methods of bone setting proved to be successful. Many people wanted to learn his new techniques. Still enjoyed his success. In 1885. Andrew Taylor Still founded a school which focused on teaching osteopathy, among other medical treatments. The school was later named the American School of Osteopathy. It was also around this time that the term ‘osteopathy’ was officially coined. The school was extremely popular. Patients came from all over the country to be treated here.

He also started his own journal, which focused on essays concerning osteopathy.

Andrew Taylor Still was married twice in his life. His first wife died in childbirth. All three of his children from his first marriage died from spinal meningitis. His second wife, Mary Elvira Taylor, died from illness. This couple had one daughter, who died from pneumonia in adolescence.

Andrew Taylor Still suffered a stroke in 1914. This stroke greatly impacted his health but did not kill him. After the stroke, his health only continued to decline. He died on December 12, 1917, in Kirksville, Missouri, USA.  He was 89 years old when he passed away.

Andrew Taylor Still’s medical accomplishments inspire doctors to this day. A. T. Still, University has been named after him. At the university, a museum (A.T. Still Museum) is also named for him.

Osteopathy is now considered to be a serious medical science. The topic is taught in schools all over the world.

A bronze statue of Still stands tall in the Missouri State Capitol building in Jefferson City.