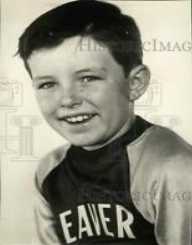 Jerry Mathers is an American actor and TV personality who shot to fame as a child artist.

Gerald Patrick Mathers urf Jerry Mathers was born on 2nd June, 1948 to Norm and Marilyn Mathers. He was born in Sioux City, Iowa and was raised in Rock Rapids, Los Angeles, California along with his two younger siblings, Susie Mathers McSweeny and Jim Mathers. Jerry’s father was a high school principal and later was appointed as the school district executive in Los Angeles.

Jerry Mathers started off at a very young age. He landed his first acting project when he was just two years old. Jerry’s debut was a PET milk commercial where he shared the screen space with comedian Ed Wynn. Around the same time, he also did a departmental store ad. His acting skills and candidness as a child earned him many roles in several movies like ‘This is My Love’ (1954), ‘Men of the Fighting Lady’ (1954). Other roles were ‘The Seven Little Foys’ (1955) and Alfred Hitchcock’s production ‘The Trouble with Harry’ (1955). As a child artist, he got the opportunity to share screen space with eminent actors like Bob Hope, James Cagney, Shirley MacLaine, and John Forsythe amongst many others.

However, Jerry’s rise to stardom came in the year 1957 with the situational television comedy ‘Let it to Beaver.’ Jerry played the role of the central character ‘Theodore Cleaver’ (‘The Beaver’), a curious young boy who lived in a predominantly white middle-class American family and was known for his antics and adventures. Jerry’s open attitude was the reason he bagged the role effortlessly. When he told the producers that he would rather attend his Cub Scout meet than audition for the role, they were impressed by his spunk as a kid and felt that Jerry was the perfect choice for playing the part of ‘The Beaver’.

The sitcom ran for a total of six seasons from 1957 to 1963. It was one of the first primetime sitcoms which were later aired in more than 80 countries in 40 languages. Jerry Mathers had a fantastic relationship with his co-stars Tony Dow, Barbara Billingsley and Hugh Beaumont. Tony played Theodore’s brother Wally; Barbara was his mother June while Hugh was seen as his father, Ward Cleaver. The iconic television series generates merchandise revenue even today, and Jerry Mathers was the first child actor to ink a deal of receiving a percentage of the merchandise revenues.

In 1962, when the famous series was scheduled to go off-air, Jerry Mathers tried his hand at music and released two songs ‘Don’t ‘Cha Cry’ and ‘Wind-Up Toy.’ For three-and-a-half years, he continued to be a part of ‘Beavers and The Trappers’, a band he formed during his high school days.

By the time Jerry Mathers reached his teens, he somewhat lost interest in acting and decided to focus on his studies. He enrolled at the Notre Dame High School in California. In 1966, while still studying in high school, Jerry joined the United States Air Force Reserve. After completing his graduation, he continued his job in the Reserve and soon became a Sergeant. However, he was never posted out of the United States and hence never saw any action.

In 1973, Jerry Mathers earned a Bachelor of Arts degree in Philosophy from the University of California, Berkeley. He found work as a commercial loan officer at a bank. He also began investing in real estate using the wealth he had accumulated during his childhood acting career. Jerry did not stay away from the entertainment industry for too long. He took up acting again in the year 1978 and appeared alongside Tony Dow in a comedy play Boeing, Boeing.

Mathers also donned the hat of a disc jockey at KEZY-AM radio in Anaheim, California. He reprised the role of The Beaver in the sequel of the film version of Leave it to Beaver title ‘Still the Beaver.’ The film’s grand success led to the making of a sequel television series of the same name. Jerry Mathers continued his acting projects by doing a variety of roles in films and on television alike. Some of his memorable performances were ‘Parker Lewis Can’t Lose,’ ‘Diagnosis Murder,’ ‘Vengeance Unlimited’ and ‘Married… with Children’.

Jerry Mathers made his Broadway debut on June 5, 2007, at Neil Simon theatre with the Tony Award-winning musical ‘Hairspray.’ He also published his memoir ‘And Jerry Mathers as The Beaver’ in the year 1998.

Jerry Mathers had three wives and three children. He first married Diana Platt in 1974. They had met in college. Mathers eventually got divorced with Diana and in 1977; he got married to Rhonda Gehring. Jerry had met Rhonda while touring the dinner theater circuit with Tony Dow for the production of So Long, Stanley. The couple had three children together - a son named Noah and two daughters named Mercedes and Gretchen. Jerry and Rhonda parted ways after 20 longs years of marriage in the year 1997. On January 30, 2011, Mathers tied the knot with Teresa Modnick in Huntington Beach.

Jerry Mathers was diagnosed with Type II diabetes in 1996. His doctor warned him that if he didn’t lose weight, the disease might prove to be fatal. On his doctor’s advice, Jerry Mathers began leading a healthy life by enrolling himself in a weight-loss program and by following a strict diet regime. He became an advocate for the cause of diabetes and began spreading awareness amongst children and adults about the growing epidemic called diabetes.