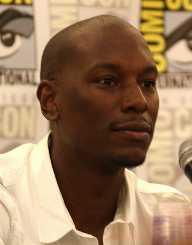 Tyrese Gibson was born on December 30th, 1978. He is an American famously known for many strengths including; rapper, singer, actor, VJ, model, screenwriter, author, film, and television producer. Addressed mostly by only his first name, Gibson has since worked on several albums as singer and rapper.

Gibson later shifted to films and date, has featured in many top Hollywood productions. His most notable film roles include; Baby Boy as Joseph "Jody" Summers, Four Brothers as Angel Mercer, Transformers series as Robert Epps and Fast and the Furious film series as Roman Pearce.

Tyrese Gibson was born on December 30th, 1978. He grew up in Watts, Los Angeles and raised by a single mother, Priscilla Murray Gibson. As the last born among four children, Tyrese spent much of his early teen years participating in talent competitions around Watts.

At the age of 17, Tyrese Gibson kicked off his modeling career for Guess and Tommy Hilfiger. Here, he landed his first recording deal from RCA records. He went on to win his first Grammy nomination with his debut album, then followed 2000 Watts, and I Wanna Go There.

Gibson later moved from music to pursue his acting career. In 2000, he landed his first role in the movie Love Song and later the leading role in Baby Boy. Then Boyz 'N the Hood followed (2001) and afterward 2 Fast 2 Furious in 2003.

His most significant acting career breakthrough came when he starred alongside Michael Bay in Transformers. Gibson also appeared in the films subsequent release in 2009, Transformers: Revenge of the Fallen and Transformer: Dark of the Moon (2011).

Tyrese Gibson's visit to Comic Con inspired him to co-write, Tyrese Gibson's MAYHEM! (2009). He published his first book, How to Get Out of Your Own Way on May 8th, 2012. The book would later be a New York Times bestseller.

On February 5th, 2013, Gibson published his second book, Manology: Secrets of Your Man's Mind Revealed. This piece also would later be a New York Times bestseller.