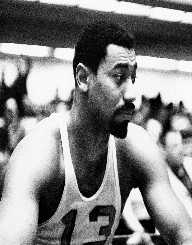 Wilt Chamberlain was born on August 21st, in 1936. His birthplace was in Philadelphia, Pennsylvania. Chamberlain is a former NBA star well known not only for his exceptional performance but also for his 7'1" frame. This also landed him the nickname "Wilt the Stilt.” His performance was outstanding every season hitting an average of 30.1 points in every game. Aside from this, some of the records that he has set throughout his basketball career include scoring the most points in one game, i.e., 100 points. Also, he holds the record of scoring the highest points- 4,029 in a single season. From his career, he earned himself a spot at the Basketball Hall of Fame. He passed away at the age of 63.

Wilt Chamberlain was born on August 21st, 1936. His father, William Chamberlain, was a welder. On the other hand, his mother, Olivia Ruth Johnson worked as a homemaker. He was one of the sons of the couple who had nine children altogether. While Chamberlain was young, he suffered from pneumonia which almost took his life away. The health issue took him away from school for a full year. Interestingly, he was not a basketball fan claiming that sissies only played the game. As a result, his main area of specialization was track and field. This later changed as basketball was one of the people’s favorite games throughout Philadelphia. While attending Overbrook High School, he was already tall by this time, and this gave him an added advantage in basketball.

Considering the advantage that Chamberlain would have on the court, many colleges demanded his services. However, he opted to enroll with the University of Kansas. His first game in college came in 1956 while playing with Jayhawks. Chamberlain led his team to the NCAA championship finals in 1957. His team did not lift the trophy, but he managed to bag home the recognition of being the Most Outstanding Player.

After his college education in 1958, Chamberlain wanted to go pro immediately, but he could not do this as NBA rules barred him. Therefore, he had to wait until 1959. Before playing basketball professionally, he played with Harlem Globetrotters and Philadelphia Warriors. Soon, he made his first appearance as a professional player in October 1959. He was playing with Philadelphia Warriors with the Knicks being their opponents. In this game, he managed to score 43 points.

The first season was a success for Chamberlain as he took home several awards such as Most Valuable Player and NBA Rookie of the Year awards.

His career breakthrough in court was in 1962. In March the same year, Chamberlain became the first ever player to score 100 points in one game. This is a record that he still holds to date. Things went on well for the entire season, and he set another record of scoring over 4, 000 points in the same season. Around this time, he was at the height of his career success, and this landed him to the top spot of All-NBA team for three successive years from 1960 to 1962.

Chamberlain changed teams in 1965 after returning to his hometown. Here, he teamed up with the Philadelphia 76ers. They were popularly known as Sixers. While playing for his new team, he helped them defeat his former team and also in conquering the Boston Celtics in the finals. During this time, the Celtics had emerged victorious for eight successive times. As a result, being crushed by Chamberlain’s team was record-breaking.

After the major victory over the Celtics, Chamberlain changed teams and went to play for Los Angeles Lakers. Here, he also proved to be a major asset for the team as he helped them clinch the NBA championship title in 1972. This win made him the NBA Finals MVP.

Wilt Chamberlain retired from professional basketball in 1973. He went on to engage in several personal projects including the release of his memoir Wilt: Just Like Any Other 7-Foot Black Millionaire Who Lives Next Door. He was not away from the court as he coached for some time. Part of his career achievement was that he earned himself a spot at the Basketball Hall of Fame in 1978. Later on, in 1996, he was also recognized as among the best 50 NBA players of all time. Far from the court, he appeared in the film industry while acting alongside Arnold Schwarzenegger in Conan the Destroyer-1984.

In spite of the success that Wilt Chamberlain had amassed, he never tied the knot with anyone. Nonetheless, rumor has it that he was associated with over 20, 000 relationships. This information was retrieved from one of the books he wrote -A View from Above.

Wilt Chamberlain passed away on October 12th, in 1999. He was at his home in L.A. when he suffered a heart failure. He was 63 years old at the time of his death.