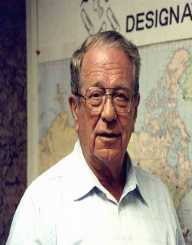 Walter Haut is an American force who came to fame for reporting the UFO crash in New Mexico back in 1947. Much has been disputed over the incident but it prompted Haut to establish an association dedicated to the extraterrestrial phenomenon.

Haut is born in Chicago, Illinois on June 3, 1922. He married a woman named Lorraine and together, the couple had two daughters named Marabeth and Julie. He died in his home at Roswell, New Mexico on December 15, 2005, at the age of 83.

He enlisted in the US Forces and served time during World War II. During the war, he served as a bombardier during missions in Japan and was also involved in the South Pacific conducting atomic tests. He was then appointed as the public information officer at Roswell Army Air Field for the 509th Atomic Bomb Group in 1947 serving under base commander Colonel William H. Blanchard.

Haut's seemingly ordinary life took a turn in a different light one fateful night in 1947. At the time, a herder discovered some sort of wreckage near his home of which US Army Air Corps checked in to investigate. The crash was believed to have happened on July 2 and by the morrow, rumors have been spreading around town about the crash of an unidentified flying object.

Haut served as the spokesperson on behalf of the US Army Air Corps at the time with Commander Blanchard's approval. He relayed the message of the US Forces who got a hold of the disc which made headline news across the state. However, no sooner had he released the statement, he was instructed to report a different story from the previous statement.

The US Forces denied the existence of the disc and had classified it as a high-altitude weather balloon instead. Since he was not present during the initial investigation at the crash landing site, Haut was not considered a witness for the event.

A year after the UFO incident, Haut parted way from the military in 1948. However, he was so enraptured with the UFO event that he spent the rest of his life in Roswell and together with his fellow event enthusiasts Glenn Dennis and Max Littell, they established in 1991 the International UFO Museum Research Center. Over the years, he publicly expressed his opinions of the incident stating that the UFO was real and that the military was trying to cover up the truth.

After his service in the military, he took a job as an insurance agent and lived the rest of his life with his family at their residence in Roswell.