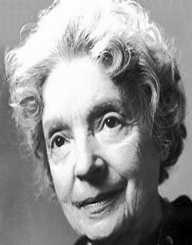 Nelly Sachs was a Jewish poet and playwright from Germany.

Leonie Sachs was born in Berlin, Germany, on December 10, 1891. Her mother’s name was Margarete. Her father, Georg, was a prominent manufacturer. She was homeschooled.

Nelly Sachs' health was always frail. Growing up, she was timid and sheltered. That became worse with the situation in Nazi Germany. She was always scared, and she was even briefly unable to speak. A week before her scheduled deportation to a concentration camp, she escaped to Sweden with her mother. Years later, when her mother died, she had a mental breakdown. She suffered from paranoia and hallucinations. She spent quite some time in a mental institution. She managed to recover and live alone.

Sachs never married and had no children. She maintained friendships with other authors, such as Paul Celan, Selma Lagerlof, and others.

Nelly Sachs started writing when she was a teenager. Most of her early work had romantic themes. In 1921, she published a collection, Legends and Tales. During World War II, she translated different texts from German to Swedish and vice versa.

Sachs’ work was mostly related by the struggles of the Jews during the Nazi regime. She was inspired by Jewish history, folk tales, and religion. Her style was unique and not comparable to many other authors.

Nelly Sachs wrote many poems. She released the collections In the Flats of Death, Escape and Transformation, Journey into the Dustless Realm, and Search for the Living. Her best-known poem is “O the Chimneys.” In it, she talked about the smoke coming out of the furnaces in the concentration camps, representing the prisoners’ suffering. She also wrote a few plays. The most famous one is Eli: A Mystery Play of the Sufferings of Israel. She told the story of the search for the killer of a child named Eli. It was released in 1950.

In 1966, Nelly Sachs received the Nobel Prize for Literature. She also won the Peace Prize of German Publishers. The city of Dortmund created the Nelly Sachs Prize specifically for her. She was the first recipient. The prize is still awarded to a different author every two years.

Nelly Sachs died from intestinal cancer on May 12, 1970. She was buried at the Northern Cemetery in Stockholm.

There is a memorial plaque marking the house where Sachs was born. There are also parks named after her in Berlin and Stockholm.