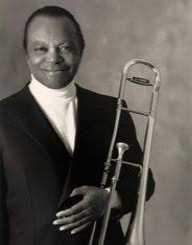 J. J. Johnson was born as James Louis Johnson in the city of Indianapolis, Indiana on January 22, 1924. His parents were Reverend James Horace and Nina Johnson. Growing up in a Christian setup, Johnson exposed to strict discipline. They attended his father’s Baptist Church and their mother’s Methodist church services every Sunday. At the age of 11, his mother paid for his piano lessons.

He received a piano from his mother soon after. He switched from the piano to play the saxophone in his music lessons at school. In 1938, he joined his classmates in forming an amateur band. He chose to play the trombone.

J. J. Johnson studied at the Crispus Attucks High School while playing with the band. Johnson became inclined to emulate such great jazz saxophonists like Lester young in playing the tenor trombone. He gained a reputation of a highly skilled trombone player while still in high school. After his graduation in 1941, Johnson chose a professional career in music rather than a college degree.

J. J. Johnson joined the Clarence Love’s band in September 1941. In March the following year, he moved to Snookum Russell’s band. While at the band, he met the trumpet player Fats Navarro whose style of trumpeting impressed him.

Johnson borrowed much from trumpeters in how he played the trombone. When he played the bebop genre, listeners mistook his instrument for a valve trombone. He followed in the footsteps of pioneer trombonists like Fred Beckett and Lionel Hampton.

Even in his young age, Johnson distinguished himself with a trademark style of playing the trombone. He caught the attention of many bandleaders and composers of jazz as a fine trombonist. He joined the Big Band led by Benny Carter in 1942.

He stayed with the band for three years, leaving the outfit in 1945. He gradually started doing solo performances. In 1943 he debuted in a solo performance of the song Love for Sale. He did another solo appearance at the Los Angeles Philharmonic Hall.

From 1945 to 1946, J. J. Johnson toured with the Count Basie Orchestra. He continued expressing his solo performances while with the group. He eventually had his first performance as a bandleader in 1946. He became a guest trombonist in numerous bands who sought his input in their performances and studio recordings. In the 1950s,

Johnson concentrated on expanding his income bracket. He briefly worked with Sperry Gyroscope Company as a quality inspector. After working with several artists during the 1950s, Johnson decided to pursue his solo career.

In the middle of the 1590s, Johnson formed a quintet and undertook a severe musical transformation. He concentrated on composing and playing his musical production. He did the production Poem for Brass.

He composed two other songs titled El Camino Real and the Sketch for Trombone and Orchestra. Johnson recorded his first jazz album in 1961 titled Perceptions. He used the quintet to popularize his album in tours of different cities.

The success of the album aroused a keen interest in his abilities as a composer and director. He disbanded his quintet and concentrated on composing his music. He occasionally worked with other artists as a guest trombonist. Johnson assembled bands for tour or recording purposes and broke them up after the assignment done. He worked with artists like Rollins, Sonny Stitt, and Jimmy Heath.

In 1967, J. J. Johnson was approached to compose pieces for television advertisements for a New York company. Johnson moved to Los Angeles for a film and television career. He wrote musical pieces for numerous television productions. Some of the notable television series is Mayberry, That girl, Scarface, Barefoot in the Park and Sea of Love. He composed soundtracks for the Hollywood film Cleopatra Jones.

Johnson soon went back to recording studios despite the established popular demand in Hollywood. In 1988, he recorded two albums titled Quintergy and Standards. He got a recording contract with the musical studio Verve. He did a duet composition and recording with composer Robert Farnon in 1994. The piece titled Tangence was well received commercially in the US market.

Two years later, he recorded Brass Orchestra. Johnson infused the bebop genre in the recordings to create an exotic tune of music. In 1998, he recorded the musical piece Heroes.

J. J. Johnson was married twice in his life. His first wife Vivian died in 1991 leaving him with their two children. In mourning Vivian, he composed the 1992 album, Vivian. He then married Carolyn, whom he stayed with until his death.

Owing to the deteriorating health, Johnson decided to retire from the demanding career in 1997. He battled prostate cancer until he succumbed to the pressures of the disease. He committed suicide on February 4 n2001 in Indianapolis. He survived by his wife Carolyn, two sons and a stepdaughter. His funeral was well attended by mourners who knew him closely or through his music.

J. J. Johnson revolutionized the way jazz music was played. He experimented with his trombone like a trumpet. Many years later, most of the new generation trombonists adopted his style of musical notes in the music genre. He is an inductee at the Big Band and Jazz Hall of Fame.