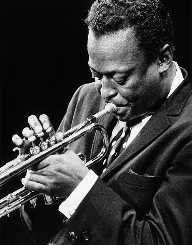 Miles Davis was born on May 26th, in 1926. He is best remembered for his music talent mainly in playing the trumpet. Aside from this, he was also a celebrated composer and a bandleader. With his exceptional skills, Davis rose to become one of the best American trumpeters of all time. In line with his career, he bagged home up to eight Grammy Awards.

Miles Davis was born Miles Dewey Davis II in a place called Alton in Illinois. He was the second born child to Cleota Mae Henry and Miles Dewy Davis Jr. His mother worked as a music teacher while his father was a renowned dentist.

For one year, Miles Davis joined John Robinson Elementary School. Later, he went to Crispus Attucks. Here, he was credited for performing well in sports, music, and mathematics.

Miles Davis honed his talent in playing the trumpet when he was under the tutelage of Elwood Buchanan. Before this, his father’s friend named John Eubanks had gifted him with his trumpet in 1935. With encouragement from Buchanan, Davis opted to play the trumpet instead of the violin that her mother insisted on.

With time, Davis left his hometown and moved to the New York City. Here, he joined Juilliard School where he partnered with Charlie Parker. Together, the two played in nightclubs to earn a living.

Owing to his particular interest in music, Miles Davis did not complete his studies at Juilliard. He quickly dropped out in 1945 to focus on his jazz music. During the same year, he managed to record music. This did not stop as he continued with recordings until 1948. At the time, he was still partnering with Parker. Sooner or later, Davis refined his trumpet style of play, and in 1949, he released a number of singles that would go on to transform the world of jazz music. These singles would later be included in the album dubbed Birth of the Cool.

In spite of his rising career, Miles Davis was a heroin addict during the 1950s. This significantly affected his performances. Fortunately, he managed to pull off from the addiction in 1954.

Following his recovery, other albums were soon released including Kind of Blue, Porgy and Bess and Bitches Brew. Porgy and Bess went ahead to be recognized as the best recordings in the history of jazz music. Similarly, Kind of Blue was credited as one of the largest grossing jazz album in history.

Miles Davis tied the knot to Cicely Tyson who was his third wife in 1981. He had four children altogether.

Miles Davis passed away on September 28th, in 1991. He was 65 years old at the time of his death. His cause of death was as a result of respiratory failure.