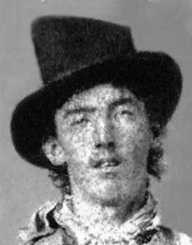 Billy the Kid was an American notorious outlaw and gunfighter. Born on November 23, 1859, he engaged in several crimes until Sheriff Pat Garret gunned him down on July 14, 1881, at age 21 in Fort Summer. His became an orphan at age 15 after the death of his mother of tuberculosis. In 1875 at the age of 16, he was arrested for the first time for stealing food and again ten days later for robbing a Chinese laundry of which he escaped two days later.

Billy the Kid since then became synonymous with crime. He was involved in the Lincoln County War in New Mexico by joining the Regulators. Being on the police radar for his numerous crimes including the murder of Lincoln County Sheriff William J. Brady in April 1878, Sheriff Pat Garrett managed to arrest Billy the Kid in April 1881. He was convicted to death by hanging after a trial for the murder of Brady. On April 28, 1881, Billy the Kid succeeded in escaping from prison, during which he killed two sheriff deputies and went in hiding. On July 14, 1881, luck eroded him when Sheriff Garrett managed to shoot and kill him in Fort Sumner.

Billy the Kid was born Henry McCarty or William H. Bonney to Patrick and Catherine McCarty in New York City. His actual date of birth has been in contention. Some claim he was born on September 17, 1859, with others attributing to the date as November 23, 1859. After the death of Patrick, the family moved to Indianapolis, where she married William Henry Harrison Antrim. In 1870, the family moved to Wichita Kansas and later to Santa Fe and Silver City, New Mexico. His mother died of tuberculosis in 1874, when McCarty was 15 years.

After the death of his mother, a boarding house owner Sarah Brown offered McCarty a room in exchange for work. In September 1875, he robbed a Chinese laundry, where he stole two pistols, and clothing. He was charged for theft after his arrest and was subsequently jailed for the act but escaped two days later. McCarthy became a fugitive and then moved in with his stepfather William Antrim, who also threw him out for stealing his guns and clothing.

Billy the Kid moved to southeastern Arizona Territory, where he worked as a ranch hand. He later befriended criminal and former US Cavalry private John R. Mackie, with whom he stole horses from local soldiers. This was when he had the nickname Kid Antrim, which later became Billy the Kid. On August 17, 1877, he was involved in an argument with a blacksmith Francis "Windy" Cahill, at a saloon in Bonita. The intense argument turned into brawls and Billy the Kid mortally shot Cahill, who died the following day.

He escaped, but on his return some day later, a local justice of peace office officer, Miles Wood held him in the Camp Grant guardhouse and informed law officer. McCarty escaped again before the arrival of the officers. He fled to New Mexico Territory, where he continued with his criminal act by joining gangs of cattle stealers. He later used the name, William H. Bonney.

Billy the Kid working as a cowboy in the ranch of English business and rancher John Henry Tunstall became involved in what became known as the Lincoln County War, after Tunstall and shot and killed by a posse led by Sheriff Willian J. Brady. Burning of revenge, McCarthy and Dick Brewer swore an affidavit against Brady and his posse. They obtained also obtained a murder warrant from Lincoln County justice of the peace John B. Wilson. He joined the Lincoln County Regulators.

On April 1, 1978, McCarty and the Regulators ambushed Brady and Deputy Sheriff George W. Hindman and killed them. McCarty was wounded in the battle. They engaged in several other encounters with opponents becoming wanted for the murder of Brady and others.

A posse led by Sheriff George Kimball of Lincoln County arrested Billy the Kid on March 21, 1979. He managed to escape from jail on June 17, 1879. Sheriff Pat Garrett and his posse later captured him on December 23, 1880, and along with three other gang members Pickett, Dave Rudabaugh, and Wilson were taken to Fort Sumner and then to Las Vegas, New Mexico. He was convicted of the murder of Sheriff Brady on April 13, 1881, and was sentenced to hang. His execution was scheduled on April 13. On the evening of April 28, 1881, McCarty escaped from jail by fatally shooting James Bell and Deputy Sheriff Bob Olinger

Some months after his escape, Sheriff Garrett had news of Billy the Kid hiding near Fort Sumner. He left for the area on July 14, 1881, to question Pete Maxwell, who was McCarty’s friend. While in Maxwell’s dark room, McCarty entered but failed to recognise Garrett’s presence since the place was dark. Garrett pulled his revolver and fatally shot McCarty twice in the chest. He was buried the following day. Several people have claimed to be Billy, the Kid since his death. There are theories that Garrett staged McCarty’s death.