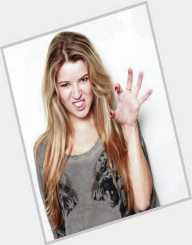 Meghan Rienks started her YouTube channel in 2010 and called it meghanrosette. She started the account mostly out of boredom. In 2010, Meghan had to stay home from school for weeks because she had mono. In hindsight, she is probably glad that she got mono now because it has led to her internet fame. On her meghanrosette channel, she has over 2,000,000 subscribers. In 2013, Meghan started up her second YouTube channel, moremeghann.

Meghan Rienks is mostly known for her beauty and charm, so it’s no wonder that her most popular videos are her makeup tutorials. She also does other beauty tutorials, like teaching her fans how to style their hair like celebrities.

Ever since she was a teenager, Meghan Rienks wanted to be an actress. Luckily for her, that dream was able to come true when she was only about 20 years old. It didn’t take long for Meghan’s fame to spread from behind the computer camera to on the screen. In 2013, Meghan made her first TV appearance in a one-time role as the character Queen Bee in the show Side Effects. Even though this role did not last long, it did open up more opportunities for her acting career. In 2014, she played the character Julia in the TV short, Shipping Julia.

The biggest thing that Meghan Rienks has ever been a part of on television is her role in the TV series, Awesomeness TV. This first started out on YouTube with a group of friends making comedy sketches together, but it eventually caught the eye of someone who saw that the show could have more potential. Awesomeness TV was made into a television show on Nickelodeon in 2013. The show continued to have skits, and it was aimed towards children. The show prided itself in being random. It took after one of Nickelodeon's previous shows, The Amanda Show, in its quirky sense of humor. Meghan Rienks was one of the stars of the show from 2013 to 2014. The show is still on the air (as of 2017), but Meghan no longer makes appearances.

After Awesomeness TV, in 2015, Meghan Rienks took a role as Kiki in the TV mini-series, How to Make Up. She appeared in two episodes of the show, giving makeup tips, much like she does on her YouTube channel.In that same year, she appeared in four other Tv shows: Flhaunt, Oscar’s Hotel for Fantastical Creatures, Makeup Mishaps, and The Honest Show. In 2016, she took on three roles in Tv series: Freakish, Mr. Student Body President, and 12 Deadly Days. So far in 2017, she has not acted in anything, but this doesn’t mean that her acting career is over. Her next on-screen performance could be just around the corner.

Apart from YouTube, Meghan Rienks is also popular on several other social media platforms. She has over a million fans on the picture and video sharing website/app, Instagram. She also has many fans on Twitter. On these two platforms, she shares pictures and videos of herself baking, spending time with friends, trying out new makeup, and just looking fabulous. Meghan Rienks also made her mother famous on Twitter. The two share a close bond, so she goes by Mamarosette. Many of Meghan’s fans can’t help but love her mother like she was their own.