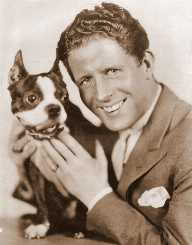 Rudy Vallee was born 28th July 1901, to Charles and Catherine Vallee. He was born in Vermont, in the United States, in a town called Island Pond. Vallee grew up in Maine.

Rudy Vallee enlisted to serve during World War I, but he was discharged when it was discovered he was only 15. He tried to enlist again, this time in Portland, Maine. He used a false birthdate, but once again, he got found out and was discharged.

Rudy Vallee had played drums in high school, and as a teenager played clarinet and saxophone in several bands in New England. He also journeyed to London, and between 1924 and 1925 played at the Savoy Hotel with the Savoy Havana Band. Rudy Vallee went to the University of Maine for a short time, but then he changed to Yale University and graduated with a degree in philosophy.

After graduating, Rudy Vallee decided to form his own band, called Rudy Vallee and the Connecticut Yankees. His band consisted of two violins, two saxophones, a piano, drums, and a banjo.

Rudy Vallee performed the vocals, and with his crooning, good looks and sophisticated manner, he became one of the first pop stars of music. In 1928 he signed a recording contract. He started performing on radio, and when he did live performances, he could hardly be heard over the screaming of his female fans.

During the 1930s, Rudy Vallee moved from record label to record label, returning to Victor in 1937. Perhaps his best-known song would be, As Time Goes By, made famous in the film, Casablanca in 1943.

Rudy Vallee enlisted in the United States Coast Guard during the World War II to help them with the 11th District Coast Guard Band. He was a Chief Petty Officer, but later promoted to Lieutenant and led the band very successfully. He retired from the military in 1944.

Rudy Vallee began to host The Fleishmann’s Yeast Hour in 1929, which was a very popular radio show at the time.

He continued to host top radio shows during the 1930s and 1940s, including Vallee Varieties, and The Rudy Vallee Show.

Rudy Vallee was prolific with his acting.

His first feature movie, in 1929, called The Vagabond Lover. Between 1929 and 1976 he was in around 39 movies, and between 1956 and 1984 he appeared in eight television series, including Petticoat Junction, Here’s Lucy, and The Lucy-Desi Comedy Hour.

Rudy Vallee also performed on Broadway in 1961. The musical was called, How to Succeed in Business Without Really Trying.

Rudy Vallee married four times. His first marriage was to Leonie Cauchois In May 1928, and the couple divorced the same year.

His fourth marriage was to Eleanor Norris in 1946, and they were still together in 1986 at the time of his death.