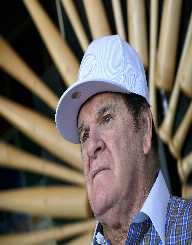 Pete Rose is famously known as a manager and Former League Baseball player. Allow me to regard him as a player of limited physical skill but not unlimited when it comes to his fans. For 24 years, Pete fought and scrapped for his baseball team from the beginning to the end. His intense love in the field grossed him ‘Chick Hustle’ nickname. He managed to secure five different positions while earning long-term league records. As a layman, Rose talent was hidden, and he probably forgot about his talent. Fortunately, his uncle was an associate scout with the Reds organization. So, that is how it all started; one victory to the next till he accumulated 4,191 hits.

Pete Rose was born in Cincinnati, Ohio, the United States to LaVerne Rose and Harry Francis Rose. He spent his childhood days in Cincinnati, and that’s where he started his baseball talent. His father was once a semi-pro football fanatic. He pushed Pete into athletic field till he became a pro at an early age. After a number of hustles of passing through several sports in grade and high school, Pete concentrated on baseball. Though he wasn’t considered as a top pinnacle, the Reds team made a deal with him for a long term.

His early career started in 1960 in partnership with Geneva Red Legs of the New York-Penn League. Pete Rose spent his early days learning as well as securing his reputation. His hustle acted as a charm that raised the Reds to higher levels. Just like his second name, he represented his team in a flower-like manner. You know, the scent of a flower attracts you more than the color itself. So, Pete looked like a baseball newbie, but he had loads of mastery in his mind. The same year Pete Rose was given the Rookie of the Year name.

Pete’s substantial contribution made him to battle with his competitors with less effort. He led his team with over 209.In 1965 Pete received three batting championship by hitting .335, and he followed it up with .348 average record. He became a spark hence attracting even the unknown. In 1970 the Reds became famous globally and at National League. From 1970 to 1976, Reds won their division in the National League. This made them reach to the World Series category.

The Reds were now known as ‘Big Red Machine.' The team was managed by Hall of Fame coaches such as Johnny Bench the catcher, Joe Morgan as well as Tony Perez. It wasn’t a shadow of a doubt that Rose was the tower of strength of his team. He became to be recognized by running out after a hit as well as his single head slide. Even then, Pete had an average level speed, but this didn’t stop him from achieving the 198 bases.

When the ‘Big Red Machine’ felt that they can now play without their hero, he went on and joined the Philadelphia Phillies. He signed a $3.2 million deal that was remarkable news in baseball history. Once again, he played like a fresher, but his moves were just out of this world. From 1980 to 1983 The Phillies topped to the World Series. At the age of 39, Pete led his baseball team and batted .321 at the age of 40 in the 1981 season.

With his grandeur physique behind him, Pete continued to focus on his career and fathomed more than other legendary like Ty Cobb and Willie Mays. After his .245 win, Rose didn’t seem like he will manage other runs. He touched an outstanding record by becoming the first player to batt 4,000 hits. He allowed his Philadelphia team to learn his baseball ropes. In 1984 Pete went back to Cincinnati and traded with Tom Lawless player where he became the manager of the Reds team.

It was clear that Rose was ready to for Cobb's quest. As a manager, nothing prevented him from achieving the first lineup. For him, quitting wasn’t included in his vocabulary till he gets what he wants. He is the type of person who will pass through flaming gasoline and continue with his pursuit. I guess Aries sign also plays a significant contribution to his fame and prowess nature. At 44 Pete managed to surpass Cobb’s record by winning over 414 games against 373 losses.

It was announced that Pete Rose started to hang out with his friends at Cincinnati gym. His friends were allegedly accused of dealing with illegal drugs as well as gambling. There and then he found himself in the gambling pitfall. And if you win for the first time, I am telling you, you will sell your every dime in the gambling business. No apologies! That is how it is.It came to the point that Pepe used over $15,000 a day for gambling. For him to pay his debts, he was forced to give his World Series rings to get out of it.

After several investigations, the baseball commissioner, Giamatti announced that Rose also gambled on baseball games, including his team. Hell broke loose when two of his friends were arrested and charged with drug cases. Giamatti had to follow the baseball rules, Pete Rose became a former when he was banned from his baseball career. After several arguments, Rose signed a suspension agreement.

For his entire life, Pete Rose married twice, and he has a son and daughter. His son, Pete Rose, Jr. followed his father’s footsteps and became a professional baseball player. In 1999 Pete Rose went to live in Boca Raton, Florida and opened a restaurant business as well as hosting a radio talk show. Despite different controversies, his fans still vote for his return to the baseball world. He promised his fans that he would never come to apologize for what he didn’t do. Yes, he accepted that he was addicted to gambling, but there is no time that he will ever come to let his baseball team down. There is a possibility that Pete Rose will be up again on the baseball field.