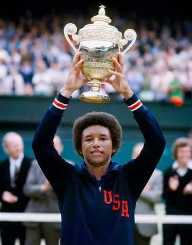 Arthur Robert Ashe Jr. was born 10th July 1943, to Arthur Ashe Sr. and his wife, Mattie. He was born in Richmond, Virginia, United States, and had a younger brother named Johnnie. Sadly, Ashe’s mother died when he was around seven, due to pregnancy complications. He and his brother were raised by their father.

Arthur Ash's father looked after the boys and encouraged Arthur Ash with his schooling and sports, but wouldn’t allow him to play American football, as Ashe only had a slight build. The family lived in the caretaker’s cottage in Brookfield Park, which was 18 acres in size.

There were sporting facilities such as basketball courts, tennis courts, baseball diamonds and a pool. Arthur Ash started playing tennis when he was seven. Ron Charity, a student at the local university and part-time instructor, noticed Ashe’s talent, and began to teach him some of the basics, and encourage him to enter tournaments.

Arthur Ash went to Maggie L. Walker High School and continued to practice his tennis. Charity brought Ashe to the attention of Robert Walter Johnson, who coached and mentored him during his tennis summer camp. Arthur Ash was under the tutorship of Johnson from 1953 to 1960. Johnson not only taught Ashe the finer points of tennis, but also mentored him to work on racial socialization through sportsmanship and etiquette.

Arthur Ash had to contend with African-American segregation as he was growing up,but broke new ground through his tennis playing. He was the first African-American that participated in the Maryland Boys’ Championships.

In Richmond where Arthur Ash grew up, he was unable to play tennis with white youths, and he also couldn’t play on the city’s indoor courts as black players were banned. Due to these setbacks, Ashe moved to St. Louis, after having been invited by Richard Hudlin.

Hudlin was a tennis coach and teacher, and he was also a friend of Johnson. So, Ashe completed his senior year at Sumner High School, where he was also able to compete more readily. Johnson lobbied on Ashe’s behalf, and he was allowed to compete in the U.S. Interscholastic Tournament, which he won for his school. Up until that time, the tournament had been segregated.

Arthur Ash then went on to win the National Junior Indoor Tennis title, and he was the first African-American to do so. He was awarded a tennis scholarship to the University of California in Los Angeles (UCLA) in 1963.

Whilst at college, he became a member of the Reserve Officers’ Training Corps (ROTC) which are officer training programs, and the membership required doing active military service after graduation. This was done in exchange for money to pay for college tuition.

In 1966, Arthur Ash graduated with a degree in business administration.

After graduation, Arthur Ashe  joined the U.S. Army. After basic training, Arthur Ashe was assigned to the West Point Military Academy. He oversaw the tennis program at the academy, and after serving the required time, he was discharged in 1969, at the rank of 1st lieutenant.

Arthur Ashe again broke new ground, when, in 1963, he was the first African-American to be selected for the U.S. Davis Cup team.

In 1965, he won both the singles and doubles titles at the National Collegiate Athletic Association competition, giving UCLA the NCAA tennis championship title that year.

To be able to remain eligible for the Davis Cup, Arthur Ashe had to stay an amateur. Due to this, he couldn’t accept the prize money from his U.S. Open win. He was also able to continue competing and not serve in the Vietnam War, because his younger brother did an extra tour of duty in Ashe’s place. In 1968, Arthur Ashe and his Davis Cup team mates took the title against Australia.

During the last couple of years, Arthur Ashe had also been petitioning South Africa to be able to play tennis there, but his visa requests were continually denied because of the apartheid policy. In 1970, South Africa was expelled from the Davis Cup competition because of its policies.

In 1970, Arthur Ashe won the Australian Open. Later that year, Arthur Ashe signed a contract with World Championship Tennis. During 1971, Ashe continued to reach the finals in tournaments, and was successful in playing doubles.

The Association of Tennis Professionals was founded, of which Ashe was in full support, and he became the elected president in 1974.

Arthur Ashe  continued to play and either win or reach the finals of several tournaments, and in 1975, he won Wimbledon.

Arthur Ashe played until the late 1970’s, and after heart surgery in December 1979, he officially retired. His remarkable career included 818 wins, and 51 titles. Even more remarkable, is that Ashe is still the only black man to have won the singles titles of Wimbledon, the U.S. Open, and the Australian Open.

Although he retired from tennis as a player, Ashe remained very involved. He wrote for magazines and commentated.

Arthur Ashe released his book, A Hard Road to Glory: A History of the African-American Athlete, in 1988. It was a three-volume set, and took almost six years to complete.

He was also a civil rights activist, and was twice arrested. Once at the Embassy of South Africa, in Washington D.C. during an anti-apartheid demonstration, and the second time was outside the White House in support of Haitian refugees.

The first was a heart attack in 1979. It highlighted hereditary heart disease, as Ashe was very fit as an athlete. His mother had heart disease when she died at the age of 27.

The second major health issue for Ashe came in 1988. He developed paralysis in his right arm. Doctors discovered he had a parasitic disease called toxoplasmosis, which was normally found in people who were HIV infected.

The third blow was when it was confirmed that Ashe was HIV positive. It is believed he became infected when he received blood transfusions during his heart surgery.

Apart from his many tennis titles, Arthur Ashe  also won several awards, some of which include:

1979:   Inducted into the Virginia Sports Hall of Fame

1985:   Inducted into the International Tennis Hall of Fame

Arthur Ashe married Jeanne Moutoussamy in 1977. She was a photographer and graphic artist. The couple adopted a daughter and named her Camera. Arthur Ashe and Moutoussamy were still married at the time of his death.

Shortly before his death, he also founded the Arthur Ashe Institute for Urban Health.