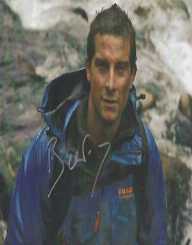 Edward Michael “Bear” Grylls was born on June 7, 1974, in Donaghadee, County Down, Northern Ireland. His family moved from Donaghadee to Bembridge on the Isle of Wight when he was four years old. His father was a conservative politician, who was implicated in the cash-for-questions affair. His mother Sarah was the daughter of politician Patricia Ford. He also has an older sister, who works as an interior design public relations agent and cardio-tennis coach. She gave him the nickname Bear when Grylls was one week old.

Bear Grylls learned to climb and sail from his father at a very young age. His father was a member of the prestigious Royal Yacht Squadron. In his teen year, Grylls learned to skydive and took lessons in Shotokan karate, earning the second dan black belt.

Grylls attended the Ludgrove School and later went to Eton College. In college, he started the school’s first mountaineering club. After college, Grylls went to study at the University of London, where he took Hispanic studied. He was a part-time student and graduated in 2002.

After graduating from the University of London, Grylls considered joining the Indian Army. He went hiking the Himalayan mountains in Sikkim and West Bengal. He served in the British army from 1994 until 1997. In 2004, Grylls was awarded the honorary lieutenant commander rank, but in 2013, he was awarded the honorary lieutenant colonel rank in the Royal Marines Reserve.

While in an army, Bear Grylls was in a terrible accident and survived a parachuting freefall. Just 18 months after breaking three vertebrae in his spine, Grylls went to Nepal and fulfilled his dream of climbing the summit of Mount Everest. He was at the time 23 years old, becoming one of the youngest people ever to reach it. He later wrote the book Rising about his experience during the expedition.

In 2000, Bear Grylls took on a new adventure. To raise money for the Royal National Lifeboat Institution, he led a team that circumnavigated the British Isles on jet skis. The trip took about 30 days to complete. The same year, Grylls also rowed naked in a bathtub along the Thames river to raise money for a friend who lost his legs in a climbing accident. In 2003, Grylls lea a team of five people on an unassisted crossing of the North Atlantic Ocean in an open rigid inflatable boat. The team traveled in an 11-meter-long boat. Between Halifax, Nova Scotia to John o’ Groats, Scotland, they encountered force eight gale winds and had to pass through icebergs.

Bear Grylls didn’t stop taking on new adventures and in 2005, he, mountaineer David Hempleman-Adams and the leader of the Royal Navy Freefall Parachute Display Team Alan Veal, made the world record for the highest open-air formal dinner party. They had dinner in a hot-air balloon at 7,600 meters dressed in full mess dress and oxygen masks. The funds raised with this event went to The Duke of Edinburgh’s Award and The Prince’s Trust. In 2007, Grylls set another record with Parajet paramotor in the Himalayas, near Mount Everest, taking off from 4,400 meters and reaching 9,000 meters. He along with two of his friends set the world record for longest continuous indoor freefall in 2008. The team used a vertical wind tunnel and surpassed the previous record of 1 hour and 36 minutes only by a few seconds.

Bear Grylls began his TV career by appearing in an advertisement for a deodorant, featuring his ascent of Mount Everest. He also appeared in an anti-drugs campaign and was featured in a campaign for Harrods. Throughout the years, he has made several appearances on talk shows, including The Oprah Winfrey Show and The Tonight Show. Grylls also made an appearance in Dos Equis’ Most Interesting Academy episode named Survival in the Modern Era.

In 2005, Bear Grylls filmed his first TV show Escape to the Legion. The four-part show featured Grylls and eleven other recruits as they re-created the French Foreign Legion’s basic desert training in the Sahara. In 2006, Grylls debuted his show Man vs. Wild which was broadcasted in Australia, New Zealand, Canada, India and the United States, and as Ultimate Survival in Europe, Asia, and Africa. The show became an immediate success, with Grylls showing how to survive in inhospitable places. The show has since run for seven seasons.

Grylls’ has written several books about his expeditions and other experiences. His book Born Survivor: Bear Grylls accompanied the TV series of the same name. Bear Grylls also wrote a guidebook for outdoor pursuits Bear Grylls Outdoor Adventures. In 2012, he released his autobiography Mud, Sweat, and Tears: The Autobiography.

In 2009, Bear Grylls was appointed the Chief Scout by The Scout Association. His five-year term was extended until 2018. Grylls is also the ambassador for The Prince’s Trust, which provides training and financial support to young people in the UK. He is also the vice president for The JoLt Trust, which takes disabled, disadvantaged or abused young people on challenging, month-long expeditions. Grylls also works with the UK charity Global Angels, raising funds with many of his expeditions.

Bear Grylls married Shara Cannings Knight in 2000. The couple has three sons. In 2015, while filming his show, Grylls deserted his son on Saint Tudwal’s Island as the tide approached. The Royal National Lifeboat Institution. The RNLI later criticized him for the stunt, since they did not know a child will be involved.