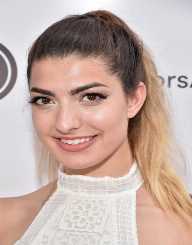 Bethany Mota, the 21-year-old beautiful girl from California, America is hailed worldwide today as the most lovable and adorable style icon and beauty queen. She has even earned the nickname of ‘Beauty with Brains’ girl. It all started when she was only thirteen years old.

Bethany Noel Mota was born on 7 November 1995 in Merced County, California, United States. Her parents Tammy and Tony Mota were of Mexican and Portuguese origin. She has an equally famous elder sister Brittany Mota, a famous YouTube celebrity.

As a shy and introvert person, Bethany was unable to get along and communicate with outsiders. As a result, she had to withstand bullying and intimidation during her school days. Sensing the precarious situation of Bethany, she was homeschooled by her parents through most of her education, though she attended public school from third to sixth grade.

To escape from the grim realities of her surroundings, Bethany Mota started to uncover the world of internet and ultimately stumbled upon into the beauty community on YouTube. During her sixth grade, Bethany also attended acting and dancing classes for a short while. She was very good at sketching and received acclaim from her teachers too.

Bethany Mota is an immensely favorite YouTube Vlogger. Besides she has gained international reputation and fame for her fashion designing and beauty tips. Her first haul video came into existence in June 2009. She created her own YouTube channel ‘Macbarbie07’ in the same year and instantly rose to stardom. In this channel, she started to upload video tutorials about fashion clothing, makeup, and hair. People, especially the younger generation quickly developed a unique bonding and liking for her and her channel. The channel gained followers so rapidly that by October 2015 it crossed a 9.5 million subscriber base.

Within a short span of time, her haul videos became so popular that retailers started using it for marketing and Bethany Mota was offered free cosmetics and gift cards. Though Bethany was equivocal about promotional videos, she identifies the products she has not purchased when featuring free products. She bought prizes and awards and distributed them among her fans to improve the fan base. Her fans are referred to as ‘Motavators.’

In December 2013, Bethany Mota launched a perfume, accessories and clothing line ‘Aeropostale’ with J.C.Penney and ‘Forever 21, with creative control in her possession. In 2014, she launched her perfume and was chosen as a content creator for YouTube’s first advertising campaign. ‘Teen Vogue,’ a popular fashion magazine for teenagers started publishing her articles around the same time. She appeared on YouTube’s web show IMO, an opinion show targeted at the teenagers.

Bethany Mota started her singing career too with the release of her single ‘Need You Right Now’ on October 13, 2014, with producer-vocalist Mike Tompkins. Danish Top 40 record chart Tracklisten incorporated the song for its debut release at number thirty. The official music video was released on Tompkins YouTube channel on February 10, 2015. Bethany Mota also wrote her song ‘Be Who You Wanna Be’ and uploaded it on her YouTube Channel in August 2015.

Following President Barack Obama’s 2015 State of the Union Address, White House as part of its’ initiative to extend to a broader audience arranged an interview with Barack Obama and Bethany Mota. So on January 22, 2015, Bethany interviewed Barack Obama before an overwhelmingly eager viewership.

Bethany Mota has also been awarded the ‘Teen Choice Award’ for ‘Choice Web Star: Female’ in 2014 bolstering her star image even more. She also has appeared in some Television Shows. Most prominent among them are ‘Dancing with the Stars - Season 19’, where she participated as a competitor. She embarked on a tour across the United States to interact with her followers personally in January 2014 and named it ‘Motavatour.’

Bethany Mota has developed a quintessential image as a vibrant and beautiful girl in the virtual world of internet and is pursuing the career of glitz and glamour with the elegance and ease of a swine in a pond adorned with lotus flowers.