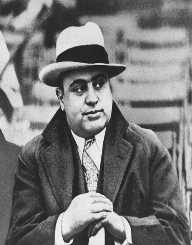 Bugs Moran was born on August 21st, 1893. His birth place was Minnesota. His other names were George Clarence Moran and George Gage. His parents were Jules and Marie Diana Gobeil. Bugs Moran began his gangster life while he was in school. While he was in a Catholic private school located in St. Paul he became a member of a juvenile gang.
By the age of 18 Bugs, Moran had already dropped out of school. He was later arrested in a Juvenile Facility after he was got stealing in a store. This was his first arrest which was then followed by two other of arrests before he even turned 21. Other series of imprisonments followed this.

In 1920 distribution of alcoholic beverages was banned. This led to the formation of gangster groups that would smuggle alcohol for profit. It was then that Bugs Moran joined the Northern Side Gang along with Dean O'Banion. Al Capone led the southern Side gang. These two gangs were always at war known as “The Bootleg.” Most of the gangs including Al Capone practiced prostitution alongside liquor smuggling something that Bugs did not approve. He had deep roots in the Catholic religion which prevented him from such practices. He developed great hatred towards Capone.

Dean O'Banion was later assassinated at his flower shop by the Southern Gang. This even aggravated Bugs' anger towards Capone. He then planned with his mob to revenge on the assassination of their fellow gang member. They failed in two attempts of taking Capone’s life. As a result, the southern gang fought back and ended up killing the Northern Gang leader Weiss. Bugs then took over the role and became leader of the gang.

When Weiss was murdered, an angry Bugs Moran tried to kill a member of Capone’s gang as well. This was not received positively by Capone. He retaliated with an attack which came to be named St. Valentine’s Day Massacre. 6 members of the Northern gang were murdered, and another died while getting medical attention. This came to a total of death to 7 members.

Bugs Moran decided to break gang code and reported Capone to the police. Capone denied the charges and was never convicted. He continued ruling his northern territory and in between began robbery. He was sentenced to 20 years imprisonment in Ohio State Prison on July 6th, 1946. This was for his involvement in a robbery that took place in Ohio. He was put on a robbery trial again in 1957 and was found guilty. He was then sentenced to ten years imprisonment.

Not much is known about Bugs Moran’s own life except that he married twice during his life. Apparently, his first wife divorced him because she did not approve his career as a gangster.

The gangster, Bugs Moran succumbed to lung cancer on February 25th, 1957 at the age of 65. He was to serve a ten years imprisonment at Leavenworth Prison a prison in Kansas at the time of his death.