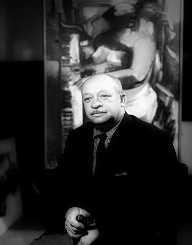 Charles Henry Alston was born on the 28 November 1907 in Charlotte, North Carolina. His parents were Reverend Primus Alston and Anna Elizabeth Miller Alston. He was the youngest of five children. Alston Sr. was born into slavery in the United States, and he later became the founder of St Michael’s Episcopal Church.

Charles Henry Alston’s family moved to New York when he was fifteen, and he studied at the DeWitt Clinton High School. At the high school, he was art editor of the school magazine. His artistic talents started to flourish, and he enrolled at the National Academy of Art. Alston received a scholarship to Yale to study fine arts but instead decided to enroll at Columbia University. He graduated in 1929 and then did a masters degree at the Teachers College which he received in 1931. While at college, he developed an interest in African art.

When Alston’s widowed mother remarried Harry Bearden, Alston met the artist Romare Bearden who was a cousin of his stepfather. Bearden was actively involved in the civil rights movement, and this influenced Alston who admired his art. While studying Alston had worked at the Utopia Children’s House, and he started teaching at the Harlem Community Art Centre (now the Harlem Community Centre for Research in Black Culture). Alston and his peers refused to exhibit in shows featuring only black artists as they viewed it as a form of discrimination. They wanted to be judged on their art, not their color.

In the late 1930s, Charles Henry Alston traveled to the South, and he took a series of photographs depicting rural life. He used these photos as inspiration for his art. The money for the trip was donated to him by the Rosenwald Fund, and in 1940, they provided more funds for him to return to the South.

To support himself, Alston worked as an illustrator contributing to magazines and journals as well as designing music covers. In 1940 he was enlisted during World War II and worked as an artist in the Office of War Information and Public Relations.

During the 1950s, Charles Henry Alston started working as an instructor at the Arts Students League. He was the first African-American to hold down a position with the League and remained there until 1971.

He was drawn to abstract art in the 1950s but also continued drawing life figures. In 1950 he entered a conceptual artwork into the American Painting Today exhibition at the Metropolitan Museum of Art, and the Museum acquired it. His first solo show was held at the John Heller Gallery in 1952. He worked as an instructor at The Museum of Modern Art in 1956 and then left to go and live in Belgium. Back home in the United States, Alston worked with a collective of African American artists (1963) and in 1973 became a professor at the City College of New York.

Alston was a successful, influential art teacher, teaching at the Arts Students League, MoMA and City College. President Johnson made Alston a trustee of the Kennedy Center in 1967, and in 1975 he became a member of the New York City Arts Commission and

He was appointed a professor at City College of New York in 1973.

Charles Henry Alston was always an activist, and along with Romare Bearden, Hale Woodruff and other African-American artists founded the Spiral Group. This group focused on using the visual arts to raise awareness of the Civil Rights movement.

Charles Henry Alston is famous for creating the bronze sculpture of Martin Luther King which was placed in the White House in 1990 (on loan from the Smithsonian Institute). When the statue was commissioned in 1970, Alston was paid $5000 for the work. There is also a bronze sculpture of Abraham Lincoln by Alston in the White House, even on loan from Smithsonian. Alston is famous for the murals at Harlem Hospital. They are entitled Magic in Medicine and Modern Medicine. Other well-known works include his Christ Head, The Girl in a Red Dress, The Blue Shirt and Head of a Woman.

When Charles Henry Alston was working on his famous murals at Harlem Hospital, he met Dr. Myra Logan. The couple fell in love and married. They stayed happily married until Logan died in January 1977, a few months before Alston who died of cancer in April 1977.

Charles Henry Alston and Hale Woodruff worked on the Golden State Murals for the Golden State Mutual Life Insurance Company in the 1940s. In later years, the company was liquidated, and a dispute between the Smithsonian Institute and the LA Conservancy broke out. The Museum of African American History and Culture offered $750.000 for the murals and wanted to remove them from the building but that LA Conservancy has raised objections.

In 2015, the legal dispute over the murals was settled, with the current owner of the building Community Impact Development, being awarded ownership. Shortly after purchasing the building, the new owners had been informed that the murals would be removed to pay the debts of Golden State Mutual Insurance Company which had gone into liquidation. The court ruling in 2015 ensures that the building will remain intact. (LA Conservancy). Architecturally significant, the building was designed by African-American architect Paul R Williams, and the murals have been in the lobby of the building ever since it opened in 1949.