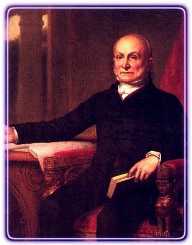 John Quincy Adams aka Old Man Eloquent rose to fame as a lawyer, and after a while, he ventured into the political field as a diplomat. But he came to prominence as the 6th President of the United States. Before fame, John served as US Representative, but he continued to essay more than one role in public service. Even then his reputation was still up close due to his fathers, John Adams reign. His father acted as the 2nd President of United States for four years. Patriotism runs in his blood but socializing wasn’t his cup of tea. Probably that’s why he ruled the US for one term and not more than that. Even then John is still remembered as the most influential Secretary of State that the whole nation still envies to have.

John Quincy Adams possessed an intellectual character that gave him a chance to think at a moderate speed when in difficulty. He was also known for his instinctive and originality despite being called an unsociable being. In everything he did, Quincy was highly ambitious, and he wanted nothing else than to complete one task at a time. He posted a leadership quality that brought limelight to his individuality and personality. That is why he is still remembered as a momentous leader who brought peace and harmony in the US. Having an intellectual mind, made him embrace innovativeness as well as creativity. He was a self-motivated person who possessed a high degree of charisma and charm. As seen above, John owned lots of talents that paved a way to his fortune and fame. John was a loyal, kind and good-natured man who wanted nothing else than to prevail peace in his native land.

On 11th July 1767, John Quincy Adams was born to John Adams and Abigael Adams. He joined a private academy in Paris, and later he went to further his education at Leiden University. During his childhood life, John used to travel with his father from one country to the next. During his teenage life, Quincy served as an interpreter of Francis Dana as well as a private secretary. Early in 1787, he completed his education with a Bachelor of Arts from Harvard College. In 1790 he received an A.M from the same Institution. For two years, John completed his novice study as an attorney in Massachusetts. In 1791 Adams continued to work as a lawyer in Boston.

Before serving as the United States President, John ventured in a wide array of government services. He saw himself working for the first five leaders of the US. Under his father’s regime, he served as an ambassador to Prussia and later to the UK under President James Madison. During Thomas Jefferson tenure, Adams worked as the leading Senator from Massachusetts. He also acted as the Secretary of State during James Monroe regime.

Quincy As A Secretary Of State

When it comes to defining the history of the US, John Quincy Adams is always on the list. During his tenure as the Secretary of State, he gained the jurisdiction of Florida for $6 million from Spain. He also acted as the principal author of the US famous public policy called Monroe Doctrine. One major part explained how he would come to rule countries like South America hence avoiding further attacks by European powers. In the process, John acted as the negotiator of Oregon and Great Britain.

Adam’s Presidential Election And The Presidency

Before the end of the 19th to 20th century, the Secretary of State was typically regarded as the next president of the US. Quincy competed with Andrew Jackson and Henry Clay. The endpoint was that no candidate received major votes. For this reason, the US House of Representatives obliged to vote for the three candidates. Adam’s took more votes in the House. During his doctrine, John’s leadership was somewhat unfruitful. He once tried to change the America economy without success. He followed it up with a project that would come to introduce several transporting systems of canals and roads. But this too failed.

After his first tenure, Adams went back and joined the House of Representatives. He became the only President to serve as a member of Congress. It was here that he fought against slavery for more than a decade. While in service, Quincy suffered a sudden stroke where he collapsed and died in Capitol, cloakroom. When it comes to his love life, John married Louisa Catherine Johnson in London. The couple was blessed with three sons and one daughter. As a side note, John started to write his memoir at eleven years of age till his demise.