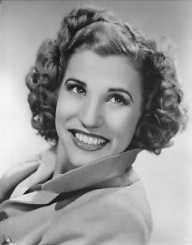 Patricia Marie Andrews was born on February 16, 1918, in Hennepin County, in Minnesota. Her father was Petr Andrews (Andrews), a Greek immigrant. Her mother was Olga Andrews (Andrews). She was the youngest of three daughters. The two were named LaVerne and Maxene.

Growing up their mother owned a pure Greek Café in Minneapolis. The sisters went to school and found that had a talent for singing. So the girls performed at school functions and around town.

The girls sang throughout high school and continued to sing after graduation. Their father put them into secretarial school saying that the sisters would need a career should their singing fail. On one night in 1932, the trio joined up with, the Larry Rich Troupe and toured with them on-a vaudeville circuit.

Then the girls’ big break came, when Dave Kapp, from Decca Records, heard them sing. He offered them a contract, and thus began their long careers as the Andrews Sisters. Their first single was recorded in 1937 and the second a year later in 1938. The second single hit number one and was the first million-dollar seller by a female group.

The Andrews Sisters recorded many hits during the 1930s through the 1940s. They also were doing many live performances and radio broadcasts.  But along with their record contract the sisters were also contracted to do movies with Universal Pictures. They made several films during that period as well.

World War II hit and the girls did their part for the war effort. The sisters performed for the soldiers in and outside the country. They also performed with the USO. Following the war, the group began to change. One of the first changes was that Patty Andrews wanted to go solo.

Patty Andrews' first solo song was recorded in 1949.  Her sisters sang back up. For a couple more years she stayed with the group, but in 1954, she left Decca Records for Capitol Records. Thus began her solo career.  For two years she recorded songs for her career including doing appearances. But in 1956, she returned to the singing group with her sisters.

From 1956 until 1967 the Andrews sisters continued to perform with each other. They stopped when LaVerne died of cancer in 1967. Then things slowed down a bit. Patty started to concentrate once again on her solo career while singing with Maxene. Maxene also had a solo career which she concentrated on when not singing with her remaining sister.

Due to a song by Better Midler in 1973, interest in the sisters’ career revived. Maxene and Patty began to sing together again. They sang on Broadway and in gigs.

However, the two still fought a lot behind the scenes. The rumor was that the last time they split was a huge fight right before a tour over the same thing as always. The two sisters separated, and Patty Andrews once again concentrated on her solo career.  However, it seems that Maxene had better luck before her death with her solo career.

Patty Andrews married twice in her lifetime. Her first husband was Martin Melcher. She married him October 19, 1947, and then divorced him on March 30, 1938. They were married for less than a year. He met Doris Day, and it ended his marriage. The two had no children.

Then a year later she married her business manager, Melvin Martin Wechsler on December 25, 1951. The two were together until his death in 2010.  They too had no children.

Although Patty Andrews won numerous awards during her years as a part of the trio The Andrews Sisters, she always liked to sing her songs. Here are a few of her awards won while with the Andrews Sisters.

2006       Inducted into Minnesota Rock/Country Hall of Fame in May

Although the sisters bickered, there was one thing that didn’t seem to be affected, and that was their music. Their sound was always beautiful as evidenced by this list of number one hits found below.

Patty Andrews was a member of the Andrews Sisters. Despite singing with Sisters, Patty embarked on her journey. Together with her sisters, she recorded 113 Billboard hits, 46 of those reaching top 1 status. They also completed 17 films. Before her solo career, the Sisters started a radio show called Eight-to-the-Bar Ranch.

Before that in 1937, they signed with Decca Records which because MCA/Decca they ended in 1953. This was a year before Patty signing with Capitol Records. She was signed with Capitol Records in 1954. Her sisters under the name of the Andrews Sisters signed as well from 1956-1959.  They left to record with Dot Records, from 1961-1967.

The group toured 50 weeks a year and managed to have a long career both as a group and as a Soloist until the deaths of all three sisters.