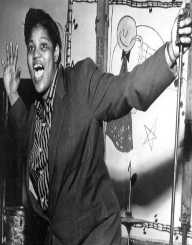 Willie Mae Thornton was born on December 11, 1926, in Ariton, Alabama, USA. Her father was a minister, and her mother sang in the church choir. She also had six siblings. Her family was very religious. Her religion greatly affected most aspects of her life, especially including some of her music. Willie Mae began going by the stage name Big Mama Thornton later in life. She is now better known for this name than her real name.

The Thornton family was a highly religious one. Since Thornton’s father was a minister, the family went to church every day. Life was harmonious in the family for many years. When Thornton was a teenager, her mother died. Afterward, she dropped out of school and began working to help support her family and herself.

Thornton’s music career started when she was only 14 years old, in 1940. She left her hometown to join the music group, Sammy Green’s Hot Harlem Revue. In the band, Thornton had many different jobs. Her main jobs were playing the harmonica and singing. She also played the drums at times. She stayed with this band until 1947. After which, she decided to start a solo singing career.

In 1947, Big Mama Thornton moved to Texas to pursue her solo singing career. She was not able to land a record contract until 1951 when she signed with Peacock Records. One of her first songs was Hound Dog, which first aired shortly after she began her contract. The song gained popularity and reached its peak in 1953. The song was later covered by Elvis Presley in 1956, making the song even more popular, even though Thornton did not gain much fame from it. She had few other hits while working for Peacock Records, and she eventually left the company in 1957.

In the 1960’s, she was not nearly as popular as she had been in the 1950’s. She moved to California to try to revive her career, but it did not work. She performed mostly for small crowds. In 1965, she left the United States and toured Europe with the American Folk Blues Festival. It was also around this time that her popularity began to grow again. After she returned to the United States, she performed at the Monterey Jazz Festival twice in the 1960’s, which only make her more famous. In the same decade, another one of her songs, Ball, and Chain was covered by  Janis Joplin. The cover was more popular than the original, but unlike Elvis’s cover of Hound Dog, this cover helped to add to Thornton’s fame.

In 1969, Big Mama Thornton signed on with Mercury Records. She focused on singing the blues, which remained popular until the early 1970’s. It was around this time that she once again joined the American Folk Blues Festival and toured Europe. However, her career did not jump back to being extremely popular right away as it did last time. Her health also began to fade. She continued to play at several big-name music festivals, but her fame would not recover.

Throughout her career, Big Mama Thornton sang dozens of songs. Some of her most famous songs are listed below.

I Smell a Rat
Little Red Rooster
Laugh, Laugh, Laugh
My Heavy Load
You Did Me Wrong

Big Mama Thornton was inducted into the Blues Hall of Fame in 1984. Her song, Ball n’ Chain, is listed in the Rock and Roll Hall of Fame for the 500 Songs that Shaped Rock and Roll. She was nominated for the Blues Music Award six times but never won.

As an adult, Big Mama Thornton began to drink heavily. She also began to put on weight (Although, in just months before her death she lost over 200 pounds). Both of these things negatively impacted her health. On July 25, 1984, Thornton suffered a heart attack and died in Los Angeles, California, USA. She was only 57 years old when she passed away.