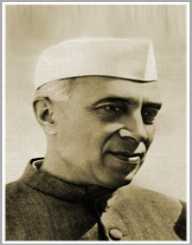 Jawaharlal Nehru was born on November 14, 1889, in Allahabad, India. He was the eldest of three children in the family. Nehru’s father was a prominent politician; he served as the President of the Indian National Congress twice during the Independence Struggle. He grew up with wealth and privilege. Nehru was educated by private governesses and several tutors, who inspired his interest in science and theosophy.

Nehru became a nationalist when he was still young. The Boer and Russo-Japanese war further increased his nationalistic views. Nehru went to study at Harrow, one of the leading schools in England in 1905. Two years later, he enrolled at Trinity College and graduated with an honors degree in natural science. Besides this topic, he also studied politics, economics, history, and literature.

After completing college in 1910, Jawaharlal Nehru went to study law at Inns of Court School of Law. In 1912, Nehru returned to India and became a lawyer at Allahabad High Court.

Jawaharlal Nehru practiced law for a couple of years. During his time at the High Court, he married Kamala Kaul. Their only child Indira Priyadarshini was born in 1917.

Nehru’s life changed after an incident on a train in 1919. He overheard some British soldiers talking and gloating about Jallianwala Bagh massacre. Also known as the Massacre of Amritsar, 379 people were killed and more than 1200 injured, when the British military continuously fired for ten minutes on a crowd of unarmed Indians. Hearing these men gloat about the massacre, Nehru felt deeply angry and vowed to fight the British.

Jawaharlal Nehru joined the Indian National Congress- one of the two Indian parties. During this time in India, there was a wave of nationalist activity. The party’s leader at the time was Mahatma Gandhi, who profoundly influenced Nehru. Gandhi was insisting on taking action to change India and to bring more autonomy to the country from the British.

The British didn’t give in to Indian demands, and in 1921, in some provinces, the Indian National Congress party and its workers were banned from operating. When the ban on the party and took effect, Nehru was sent to prison for his connection with it. During the next 24 years, Nehru was sent to jail for a total of 9 times, which added up to more than nine years in prison.

While imprisoned, Jawaharlal Nehru studied Marxism, since he was interested in its philosophy. However, he was repelled by most of its methods. His views were later formed with the economic thinking of Marxist, but with adjustments to Indian conditions.

After a long struggle towards Indian emancipation, Jawaharlal Nehru was named the president of the Indian National Congress in 1928. Mahatma Gandhi pushed towards Nehru’s rise in the party since he believed that the young age of Nehru would attract the youth to the party. In 1929, Nehru led the session at Lahore that proclaimed the goal of India to become independent. The following year marked the start of the Round Table Conferences, which were aimed at working towards a plan for this aim.

In 1931, Nehru worked closely with Gandhi and the party and signed the Gandhi-Irwin pact which declared a truce between India and Great Britain. When the agreement took effect, the British agreed to free political prisoners, if Gandhi decides to end the civil disobedience movement. However, the pact did not ensure immediate peace, and both Gandhi and Nehru were imprisoned in 1932 on charges for their work on civil disobedience movement.

Gandhi was not able to attend the second Round Table Conference, but in the third conference, in 1935, the Government of India Act was signed, giving the Indian provinces autonomous government. By the time the Act was signed into the law, the people had seen Nehru as the natural heir to Gandhi. In 1940, Gandhi finally named Nehru, his successor for later years.

When the World War II started, India was committed to the war effort without any consultation with the autonomous provincial ministries. The Congress Party responded by withdrawing their representatives from the provinces, and a civil disobedience movement was staged, where Nehru was once again imprisoned. He spent a year in jail and was released three days before the attack on Pearl Harbor.

When the Japanese were approaching Indian borders, Britain wanted India to combat the new threat immediately, but Gandhi and Nehru continued to call on the British to leave India. For their actions, they were both jailed for three years. In 1947, the Congress party and Muslim League were discussing the division of India.

As the prime minister, Jawaharlal Nehru wanted India to be modern, at the same time stressing secularism, insisted on the unity of India and carried the country towards recent innovations and technological progress. He respected democratic values and cared for social issues. One of his most prominent works was to reform the Hindu civil code. This meant that widows could be equal to men in matters of inheritance and property. He also criminalized caste discrimination. During his administration, India Institute of Medical Sciences, Indian Institute of Technology and the National Institute of Technology were created.
One of the biggest issues during Nehru’s leadership was the dispute with Pakistan about the Kashmir region. Both countries claimed the region, and Nehru’s peaceful settlement plans failed. Pakistan tried to seize the region with force in 1948, but the region continued to be a dispute into the 21st century.

When the Cold War started, U.S.S.R. and U.S.A. were both seeking India as an ally, but Jawaharlal Nehru remained neutral in his position. Nehru was also a supporter of the newly formed the People’s Republic of China and strong supporter of the United Nations.

Jawaharlal Nehru established what is now known as the four pillars of domestic policies: democracy, socialism, unity, and secularism. His ideas and leadership were highly admired both in India and internationally. His birthday is celebrated in India as the Baal Divas- Children’s Day.