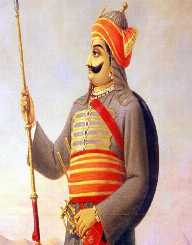 Maharana Sangram Singh popularly known as Rana Sanga was born on 12 April 1482, in Malwa, Rajasthan, India. He was the son of the Rajput ruler of Mewar, Rana Raimal and grandson of Rana Kumbha. He was a scion of the Sisodia clan of Suryavanshi Rajputs. He had many brothers.


REIGN AS THE KING OF MEWAR

After his father’s death, Rana Sanga inherited the throne of Mewar defeating his warring brothers by winning a fierce battle over them. It was the first decade of the sixteenth century and Muslim invaders, including the Afghan Lodis and the Mughals, were trying to conquer as much of Indian territories as possible. Standing tall, Rana Sanga concentrated on consolidating his domination over his kingdom with equal emphasis on its expansion.

Soon, Rana Sanga was able to establish his stranglehold on Mewar and started taking an interest in the affairs of the neighbouring Malwa. Malwa was tottered by internal conflicts under the reign of Mahmood Khilji, a non-Indian Muslim invader. Khilji immediately sought assistance from Sultan Ibrahim Lodi of Delhi and Bahadur Shah of Gujrat in thwarting the aggression of Rana Sanga. However, the Rajput Wazir of Khilji, Medini Rai requested Rana to save him.

There was an ongoing conflict between Rana Sanga and the invading Muslim Sultans of North India which culminated in the Battle of Gagron. In the ensuing battle, Khilji and his Muslim allies were wholly routed and, Khilji was taken as a prisoner of war. By the Rajput ideology and tradition, Rana in a gesture of kindness and benevolence treated the captured Sultan with honor, freed him and restored his kingdom in exchange of one of his sons who was being kept as a hostage.

Emerging victorious from the battle of Gagron, Rana Sanga became more ambitious and started expanding his kingdom by conquering the areas of north-eastern Rajasthan which was under the control of the Afghan Lodi dynasty. He successfully captured many regions including the Fort of Ranthambhore by his aggressive invasion. In retaliation, Lodi attacked Mewar with all his might. However, the ethnic Afghan army of Lodi failed to make any significant contribution on the face of the onslaught of the strong Rajput forces of Rana Sanga.

The battle, historically known as the Battle of Khatoli, lasted for only 5 hours during which Ibrahim Lodi was captured and made a prisoner in the hands of Rana Sanga’s army. He was released after some time in exchange for a payment of ransom. Unfortunately, Rana Sanga got severely injured in this battle. He lost an arm by a sword cut, and an arrow made him lame for life.

Most of the soldiers fighting for Ibrahim Lodi fled during the debacle of the Battle of Khatoli and his resources were severely compromised. Humiliated and smarted by the disastrous defeat inflicted by Rana Sanga and his Rajput army, an enraged Lodi was forced to remain quiet for the time being and concentrate on reorganizing his forces. He found a golden opportunity to avenge the loss when Rana Sanga's army was busy in their wars with the Sultan of Malwa and Gujarat. He attacked Mewar trying to take advantage of the situation.

A battle took place near Dholpur. However, once again Lodi and his men were no match for the crafty and superior Rajputs. They fell like ninepins and were comprehensively beaten by Rana Sanga’s army. Rana, in his bid to further consolidate and expand his kingdom, captured most of the areas of present-day Rajasthan following the victory at the Battle of Dholpur.

Gradually Rana Sanga’s image as an Indian-origin powerful ruler gained momentum. With the stature of a cardinal player in the power struggle of Northern India; his ambition to conquer the Muslim rulers of Delhi grew in confidence. His objective was to bring the whole of India under his control. Having conquered Gujarat and Malwa, he began marching towards Agra on his mission to wrest control of Delhi ultimately. Mughal invader Babur, at this juncture defeated Ibrahim Lodi and captured the Delhi Sultanate.

Unaware of Babur’s strength and the firepower he possessed through his cannons, Rana Sanga decided to wage war against the Mughal Emperor. With the support of Raja Hasan Khan Mewati, Raja Medini Rai of Alwar and the Afghan Prince Mehmud Lodi, Rana ordered Babur to leave India. He sent an emissary named Sardar Silhadi of Raisen to convey the message to the Mughal Emperor. Unfortunately, Silhadi was won over by Babur and became his spy. He convinced Rana to believe that war is the only alternative. On the other hand, Babar realized the fact that it was imperative for him to engage in the fight to fulfill his ambition to rule North India.

A combined troop of Rana Sanga comprising Rajputs and the allied forces met Babur’s army at Khanwa near Fatehpur Sikri in 1527. It was a bloody, brutal and bitter battle. Silhadi with a contingent of 30,000 men defected to Babur's army at an opportune moment. Rana Sanga feeling betrayed with the defection, tried to reorganize his army but in the process, he got wounded and fell unconscious from his horse. His military who were fighting valiantly till that moment thought their leader to be dead and fled the war front in a complete disorderly fashion. The Mughals were thus allowed to win the Battle of Khanwa.

The loyal Rathore contingent from Marwar took Rana Sanga to safety and saved his life. After regaining consciousness, Rana vowed to avenge the defeat with renewed vigour. When the forces of Babur attacked his ally Medini Rai at Chanderi, Rana joined his depleted army to support him. But Babur’s superior arsenal, especially the cannons became the deciding factor in turning the outcome of the war in favor of the Mughal Emperor.

Rana Sanga breathed his last on January 30, 1528. It is rumoured that the Maharana was poisoned by his noblemen to prevent him from waging another war against the Mughals.