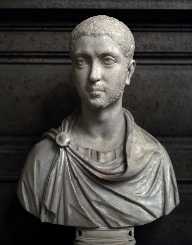 Alexander Severus was born on October 1st, 208. His place of birth was in Arca Caesarea currently known as Akkar in Lebanon. He was the son of Marcus Marcianus and Julia Mamaea. His father was a Roman Aristocrat from Syria and his mother, a renowned Roman. His grandmother from his mother’s side was Julia Maesa. She was quite an ambitious politician.

Alexander Severus was a humble person since he was young. He lived a simple life just like any other boy his age. His attire was not of gold linen but wore plain and ordinary garments. He was trained in military services as well as literature. During his studies, he studied under Valerius Cordus and Aurelius Philippus among others.


Ascend To The Throne

Alexander Severus became emperor in 222 at the age of 14. He had succeeded his cousin Elagabalus following his assassination. His grandmother Julia Maesa is believed to have been involved in the assassination. In her quest for power, she plotted for Elagabalus to be assassinated to pave the way for Alexander.

Although Alexander Severus tried his best to rule people in a way they desired. However, his mother and grandmother took over all his control given that he was still quite young. They made him their puppet in their quest for power.

During his reign, he established a board that comprised of 16 senators. He also came up with a municipal council that had 14 members. He greatly supported religious activities. He even allowed for a synagogue to be constructed in Rome. However, his intention of building Jesus’ temple was denied by his advisers.

He came up with policies that favored soldiers for he was compassionate about them. When war broke out between 230 and 231, Alexander Severus did not have the right skills for winning the war. This led to the invasion of Mesopotamia’s Roman province by king Ardashir I of Sassanid. Initially, his army was able to defend their territory till later when they lost. Taurinus was then proclaimed emperor in 232 but before he could rule he drowned and died.

In 234 they were unexpectedly attacked by the German barbarians. His army was not prepared for the war for the German barbarians surprised them. He realized that he had no chance against the Germans so he decided to take the matter into his own hands. He bribed the Germans silently for them to go away and leave his country in peace. This, however, was not taken well by his soldiers who became quite angered by this drastic action by their emperor. They viewed this as a bad decision by their leader and hence assassinated him.

Alexander Severus married three times in his life but never had children. His first marriage was to Sallustia Orbiana. He tied the knot with her in 225 but later the two divorced in 227. He then married his second wife, Sulpicia Memmia. The name of his third wife is unknown.

Alexander Severus took his last breath on March 19th, 235 following an assassination. He was 26 years old at the time of his death.