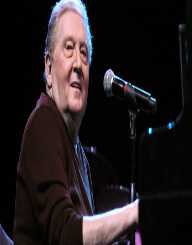 Jerry Lee Lewis was a rock 'n' roll legend of the 1950s and a country musician in the 1960s.  Throughout his career, he was just as controversial as his music.

Jerry Lee Lewis was born on September 29, 1935, in Ferriday, Louisiana.  Jerry Lee Lewis started playing piano at the age of nine.   Despite hard times, his parents made sure that he had a piano to practice his passion.

Jerry Lee Lewis attended Southwest Bible Institute but was later expelled.  The music he performed was unacceptable to their standards, citing it as the devil's music.

Jerry Lee Lewis understood what it meant to be a struggling musician at the beginning of his career.  Jerry Lee Lewis would find gigs in Natchez, Mississippi in order to make money.  Even though Jerry Lee Lewis was very skilled as a singer and pianist, record producers believed that rock stars should have guitars and not pianos.

His first record was recorded at Sun Records in Memphis, Tennessee in 1956.  Some of his most famous songs of that era included "Whole Lotta Shakin' Goin' On."  At the peak of his career in rock and roll, Jerry Lee Lewis also recorded songs like "Good Golly Miss Molly" and "Sweet Little Sixteen."

Jerry Lee Lewis and co-songwriter Ron Hargrave wrote "High School Confidential" for the 1958 movie with the same name.  It became a Top 40 hit. Jerry Lee Lewis was also one of the cast members as he made a cameo appearance at the opening of the movie.

After his rock and roll career met a roadblock, he turned to country music.  In 1968, Jerry Lee Lewis released ballads such as "Another Place, Another Time" and "To Make Love Sweeter For You." It was in 1972 when Jerry Lee Lewis made a return to the rock and roll genre with popular songs like "Chantilly Lace."  Jerry Lee Lewis also returned to movie music by rerecording all of the songs for the movie Great Balls of Fire!.  The 1989 film focused on his early career and controversies.

Even though Jerry Lee Lewis was primarily a solo artist, he is known as one of the members of the Million Dollar Quartet.  Jerry Lee Lewis was the new guy in a collaboration with Elvis Presley, Johnny Cash, and Carl Perkins.  Their impromptu jam session led to recordings that were later released and made into a stage musical.

One of Lewis's most famous works is "Great Balls of Fire" which is also the name of the film about his life.

In total, he had six children.

The music that Jerry Lee Lewis played was too much for his ultra conservative upbringing.  Not only that, but his many marriages were also hot gossip.

His marriage to Myra in 1957 was scandalous because she was his cousin and only thirteen years old at the time. This impacted his career as he and his music were shunned by radio and live performance venues.

Jerry Lee Lewis continued performing and recording later in his life.  Jerry Lee Lewis recorded duets with famous names in rock and roll such as Elvis Presley and Roy Orbison.  They were compiled in the 2006 album Last Man Standing.

His nickname Killer went well with this album title.  This as he was the last of the rockers of that era, particularly the Million Dollar Quartet to still be alive.  Another album of duets, Mean Old Man, in 2010 included compilations with contemporary artists such as Mick Jagger, Sheryl Crow, and Eric Clapton. Jerry Lee Lewis made appearances at the Grammy Awards in 2008 and has performed as late as 2014.  Jerry Lee Lewis lives in Mississippi with his seventh wife.

Jerry Lee Lewis produced 40 studio albums and 77 singles over the course of his career.