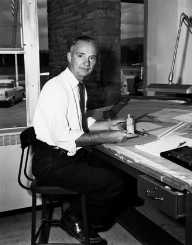 Martin Ryle was born in Brighton, Sussex, England on the 27 September 1918. He was one of five children. His father John A. Ryle was the first chair of social medicine at Oxford University.

Martin Ryle was educated at Bradfield College and Oxford, graduating in 1939.

In 1945 Martin Ryle was invited by J.A. Ratcliffe to apply for a fellowship to join the Cavendish Laboratory at Cambridge University. Ratcliffe had been doing ionospheric work and wanted Rayle to start an investigation of the radio emissions from the Sun. These radio emissions had only recently been discovered accidentally with radar equipment. During this time Ryle also worked with Lawrence Bragg.

Martin Ryle was offered a lectureship in physics in 1948 and 1949 elected to a fellowship at Trinity College. Then in 1959, he was appointed as chair of Radio Astronomy. He was president of Commission 40 of the International Astronomical Union (1964-1967), and in 1972 he was made Astronomer Royal. He was knighted in 1986.

The work of the Cambridge radio astronomy group (The Third Cambridge Catalogue, 1959) assisted in the discovery of the first quasar.

In 1974 Martin Ryle shared the Nobel Prize in Physics with Antony Hewish. The pair were awarded the prize for their pioneering research in radio astrophysics. Ryle for his observations and inventions about the aperture synthesis technique.

Martin Ryle married Rowena Palmer in 1947, and they had three children: Alison, Claire, and John. Martin Ryle died on the 14 October 1984. He was sixty-six years of age.

Hobbies included sailing. Martin Ryle designed and built boats which he used to sail with his family.