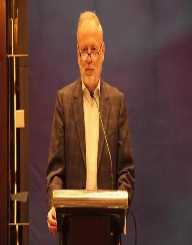 Hartmut Michel was born in July 18, 1948. He is a German Biochemist. He won the 1988 Chemistry Nobel Prize. He is currently aged sixty-nine.

Hartmut Michel was born in 1948 at Ludwigsburg, Germany. He was born to Karl Michel and Frieda Michel. He enrolled to an unrevealed high school. He spent most of his time reading books. He had his favorite subjects such as history, biology, chemistry, and physics. He then joined the University of Tubingen to study Biochemistry. He later worked in Tubingen’s Biochemistry laboratories. He thereafter joined Dieter Oesterhelt’s laboratory for completion of his diploma practical part where he worked on ATPase activity of halobacter. In 1974, he got his diploma. He later served Dieter Oesterhelt’s laboratory as a worker. In 1977, he obtained his Ph.D. on his thesis ‘correlating the intracellular levels of adenosine di-phosphate and tri-phosphate with electrochemical proton gradient across the halo bacterial cell membrane.’

In 1977, Hartmut proceeded with his research back at Dieter Oesterhelt’s laboratory. His research was on fusing delipidated bacteriorhodopsin with bacterial vesicles in order to achieve light driven amino acid uptake. In 1979, after a long struggle, he finally observed the first legit bacteriorhodopsin’s three-dimension crystal. He later went to Martinsried, Munich. He thereafter became the chief head and director of the Max-Planck-Institut für Biochemie. In 1980, he alongside Richard Henderson worked together performing X-ray experiments at the MRC in Cambridge, England.

In 1981, he found out the first crystals of the photosynthetic reaction Centre from the purple bacterium Rhodopseudomonas viridis. They then x-rayed the first reaction Centre, and the results outcome were of best quality. In 1982, he alongside Robert Huber and Johann Hans Deisenhofer worked with X-ray crystallography in determining the exact arrangement of above 10,000 atoms that make up a protein complex. They later discovered three dimensional structure of a protein complex found in certain photosynthetic bacteria that was essential for accelerating photosynthesis. In 1987, Hartmut was appointed the Department of Molecular Membrane Biology’s Director at Max Planck Institute of Biophysics in Frankfurt.

In 1986, Hartmut was honored with a highest German Research’s honor ‘Leibniz Prize of the Deutsche Forschungsgemeinschaft.’ In 1988, he alongside Johann Deisenhofer and Robert Huber received an honorary Nobel Prize in Chemistry due to their effort in discovering the three dimensional structure of a photosynthetic reaction Centre. In 2008, British Biochemical Society honored him with the Keilin Medal. In 1995, he served the Royal Netherlands Academy of Arts and Sciences as a foreign member. In 2005, he emerged the elected Foreign Member of the Royal Society denoted ‘ForMemRS.’

Hartmut Michel married Elena Olkhova with whom they have two children. He is currently aged Sixty-nine.