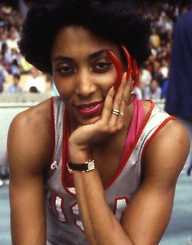 Yolanda Gail Devers was born on November 19, 1966, in Seattle, Washington. Her family later relocated to National City, California, a small town near San Diego. Her father was a minister and mother was a teacher. Her elder brother Parenthesis, who later became a professional bodybuilder, grew up with his sister together. He used to make fun of her when she lost races competing with him. The provocation made Gail even more determined not to lose anymore against her brother. She trained rigorously and was subsequently able to achieve triumph over her brother.

Gail Devers graduated from Sweetwater High School in 1984. During her school days, she participated in many interschool competitions. Her outstanding performance in the track and field events helped her school win the San Diego sectional track and field team title. She also won the 100-meter race and 100-meter hurdles in the 1984 State championships.

Gail Devers' incredible accomplishments in the track and field events during her senior year in Sweetwater High School drew the attention of many Universities and consequently she was flooded with offers of athletic scholarships from major Universities. She wisely chose University of California, Los Angeles, where she got an opportunity to train under the legendary coach Bob Kersee.

In 1988, while training for the ensuing Summer Olympics to be held in Seoul, South Korea, Gail Devers encountered a mysterious physical problem. There was a host of ailments including migraine headaches, bouts of insomnia, fatigue, loss of vision, muscle pulls, fainting spells, etc. troubling her fiercely. In 1990, she was diagnosed with Graves’ disease. It was an autoimmune disorder that affected the thyroid gland.

Consequently, Gail Devers underwent radioactive iodine treatment. Thyroid hormone replacement therapy followed it. But her condition worsened during the radiation therapy. There were blisters and swelling all over her feet. She could not even walk and either had to crawl or be carried. A doctor also planned to amputate her feet. However, she showed some miraculous improvement after the radiation therapy was stopped and recovered entirely with a short span of time. She courageously battled the disease and resumed her training in a short while.

After her fantastic recovery from illness, Gail Devers won a silver medal in the 100-meters hurdles in the 1991 World Championship. At the 1992 Summer Olympics held in Barcelona, Spain, she was to participate in the 100-meter race and 100-meter hurdles as a member of the United States Olympic team. The contest was becoming fierce and most competitive.

Gail Devers qualified for the 100-meter final and was one of the five contestants finishing as close as within a time of 0.06 seconds apart from each other. The final race was a photo finish with Devers winning the gold medal narrowly beating Jamaican Juliet Cuthbert. In the 100 meter hurdles, Devers surged ahead, and it seemed that she was running towards her second gold. But as luck would have it, she hit the last hurdle and managed to finish only in the fifth place.

the 100-meter women’s final, Devers and her compatriot Jamaican born Merlene Ottey clocked the same time. After a detailed analysis of the race, Devers was adjudged the winner. She became the first woman athlete to retain the Olympic 100-meter title since Wyomia Tyus. However, she again could not succeed in her favorite event 100-meter hurdles and could only finish her race in the fourth position. She went on to add another gold participating in the United States 4x100 meter relay team.

Gail Devers took a short break from competition in 2005 to raise a family. She came back strongly when at the age of 40, she beat 2004 Olympic champion Joanna Hayes in the 60-meters hurdles at the Millrose Games, New York City, clocking the best time of that season. It was a world record for a 40-year-old contestant.

Gail Devers was inducted into the National Track and Field Hall of Fame in 2011.

She was also elected to the United States Olympic Hall of Fame in 2012.

In 2013, Gail Devers received the NCAA Silver Anniversary Award presented each year by the American National Collegiate Athletic Association to six distinguished former college student-athletes on completion of their 25th anniversary of the end of their college sports career.

In 1988, Gail Devers married Ron Roberts, the captain of the UCLA men's track team. They were separated during her encounter with the Graves’ disease. They finally divorced in 1991. She later married Mike Phillips and had two daughters.

Her alma mater The Sweetwater High School Football and Track Stadium is renamed as Gail Devers Stadium in her honor.