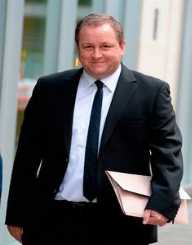 Mike Ashley was born on September 9th, 1964. His place of birth was in Burnham, England. He is famous for being an English businessman more so in the sporting arena. Ashley gained the ownership of Newcastle United after purchasing the club for about £135 million. According to the 2012 Forbes magazine ranking, Ashley was ranked as the 15th richest in Britain only. He is also a completely discreet individual and rarely takes interviews.

Mike Ashley was born on September 9th, 1964. Little information is known regarding Ashley’s parents. Nonetheless, speculations are that he came from humble beginnings. He went to Burnham Grammar School where he enrolled for his early education. He later graduated at the age of 16. During this time, Ashley was a squash player. However, he suffered an injury that brought an end to his career in this sport. With time, he began coaching in the same field. His entry into the business followed this by opening up a sports shop in Maidenhead. He had been loaned some money from his family.

The first sports business that Ashley formed was called Mike Ashley Sports. This was a business entity that began its operations in 1982. Two years later, his business had thrived and aided him to expand easily. He went ahead and opened up Preston Sports Store which operated in London. Motivated by the success of his thriving business, Ashley opened up several stores. By 1992, he was a proud owner of up to 12 stores. During this time, his business chain was referred to as Sports and Ski.

Sooner or later, Ashley changed the name of the chain store to Sports Soccer. He continued enjoying success in his business, and by the end of that 90s decade, Ashley had about 50 stores in the country. With the growth of his business, this prompted Ashley to transform it into a limited liability company. This also motivated him to rebrand it once more to Sports Direct International Plc.

In the 2000s, his business performed well as it rose steadily in the market. Two years later, Ashley invested in major acquisitions which brought him several stores across the country. For example, he acquired Lillywhites Chain which had ten stores. Around this period, he also acquired the Lonsdale brand. By 2003, he had over 150 stores that operated as his business. Another acquisition that his company made was buying the Donnay brand before the end of the 2000s era.

Ashley continued with acquisitions in 2004. During this time, he acquired a sports equipment manufacturing firm called Dunlop Slazenger. He did not stop there. He went ahead and bought Karrimor brand for approximately £5 Million. By the end of this year, he was a proud owner of several brands in his business chain including Carlton, Dunlop, Slazenger, and Karrimor.

2007 brought major success to Ashley’s business career. It is in this year that his Sports Direct International plc Company went public. Aside from the fact that its initial opening earned him $1.8 billion, he also garnered high reputation. During the same year, Ashley invested in opening an online store with a similar brand name, Sports Direct International. Since then, things have been on an upward trend for him and his growing empire. The trend of acquisitions continued in 2008 as the organization acquired John David Group. Later in 2012, Ashley acquired JJB's brand which was one of its major rivals. The following year, he purchased 116 Republic brand. Throughout his business career, Ashley, an organization that has over 500 retail stores in Europe.

Apart from being the proud owner of Sports Direct Mike Ashley purchased Newcastle United football club in 2007. Additionally, he bought 8.9% of Rangers Football Club’s shares which is situated in Glasgow.

Mike Ashley tied the knot with Linda Jerlmyr in 1988. Together, they have three children namely Oliver, Anna and Matilda. Sadly, the two divorced in 2003.