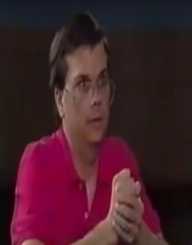 Mark David Chapman is an American criminal who is famous for his viciousness for killing John Lennon. The murder got highlighted because of the viciousness of the murder as Mark killed John Lennon by shooting him five times and not only that by also hitting him four times in the back and after all this viciousness, he sat down there reading his favorite novel ‘The Catcher in the Rye’ by J.D. Salinger’s until the police officials finally arrested him.

Mark Chapman was born on 10th of May in the year 1955 in Fort Worth, Texas, the United States to David Chapman and mother, Diana. Mark had a very troubled childhood with a constant fear of his father who was a staff sergeant in the U.S. Air Force and used to abuse his mother physically. His mother was a nurse and is also said to be uninvolving. Mark Chapman is a murderer who not only shot but also killed John Lennon on 8th of December in the year 1980 in New York City.

Mark Chapman did not have the best of childhoods as he was always intimidated by the abusive nature of his father which led him to think and fantasize things that were completely non-existing. He also attended the Columbia High School in Decatur, Georgia and because of the disturbed family and abusive environment at home; he indulged himself in drugs at an early age and also started skipping classes for the same.

Later on by the year 1971, Mark started working as a counselor in Georgia YMCA where he was also given a nickname by the children i.e. ‘Nemo’ and his hard work was also recognized and awarded. He was awarded as an outstanding counselor.

The whole murder incident was surrounded by the imaginary environment that was created as a result of two major ingredients i.e. the bad childhood of Mark Chapman and some misunderstanding of the statements by John Lennon because of that childhood.

This started when Chapman was recommended by his friend a book by J.D. Salinger i.e. The Catcher in the Rye. The book had a very serious impact on him as he started relating himself to one of the characters of the novel i.e. Holden Caulfield.

The madness went to another level when he developed a series of obsessions which included the same novel, music, and musician John Lennon. Many times he also signed himself as Harold Caulfield from the novel in man letters to his best friend.

Being a huge Beatles fan, the final nail was laid when this obsession turned to another level due to a religious comment by Lennon where he stated that the Beatles were more popular than Jesus. This comment was considered unacceptable by the Chapman as he considered the same blasphemous. The obsession of Mark Chapman was growing day by day and was influenced by Anthony Fawcetts’s novel on John Lennon where the book shows the double standards of John Lennon. John Lennon was shown to be preaching peace and love but involved in all the worldly desires and also owning those yachts, farms, and estates etc.

He got deeply influenced by the novel and planned to murder John Lennon. Then finally on 8th of December, 1980 he shot John Lennon at the entrance of the Dakota Apartment Building in the New York City.

Mark Chapman was charged with a second degree murder. His wife was also charged for knowing the intentions and preparations regarding the incident and not reporting or taking any action for the same.

He was ordered for a psychiatric treatment and was also sentenced to an imprisonment of twenty years to life which is just less than the maximum punishment by five years. During his term, Mark Chapman worked majority of the time as a legal clerk and a kitchen helper.