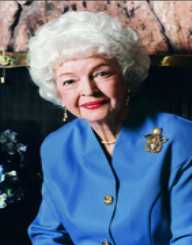 Dale Evans was born on October 31st, in 1912. She was a famous American actress and a singer. She is best remembered for her collaboration with her husband, Roy Rogers.

At the time of her birth, Dale Evans was called Lucille Wood Smith. She was born in Uvalde in Texas. She was the daughter of Bettie Sue Wood and T. Hillman Smith. When Evans was only 14 years old, she ran away and got married to Thomas F. Shortly after; she welcomed her firstborn son named Thomas F. Fox, Jr. She was only 15 when she became a mother. She went through a rough time after her husband left her. Around this period, she had begun pursuing a music career.

Soon after her husband had abandoned her, Dale Evans moved to Memphis, Tennessee where she went to work as a singer and a pianist in local radio stations. In 1929, she divorced her husband and adopted the name Dale Evans as a means of promoting her music career.

Evans honed her singing talent while she was singing at the radio stations where she had been hired. Later, this led to her first test as she attempted to land on a recording deal with 20th Century Fox studios.

Unfortunately, while Dale Evans was trying her best to earn something out of her career, things did not go well in her personal life. She went through other two failed marriages. She later went to work with Republic Studios where she starred alongside Roy Rogers.

Dale Evans and Rogers tied the knot in 1947 in Oklahoma. This marked Evans’ fourth marriage while Rogers was remarrying for the third time. While working on-screen with her husband, the two featured in films such as The Cowboy and the Señorita, The Yellow Rose of Texas, My Pal Trigger, Home in Oklahoma, Out California Way and several others.

Dale Evans got married for four times during her lifetime. Her first failed marriage was to Thomas F. Fox. Later, she married August Wayne in 1929 before divorcing him in 1935. Her third marriage was to Dale Butts in 1937. The two divorced in 1946. The following year in 1947, she married Roy Rogers until his death. Her last marriage was successful.

Dale Evans passed away on February 7th, in 2001. She was 88 years old when she died. She died as a result of congestive heart failure.