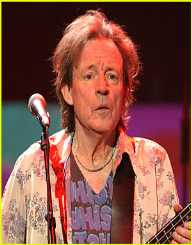 John Symon Asher Bruce was a Scottish singer and songwriter known as a member of the British band Cream. Born on May 14, 1943, he is considered as one of the greatest bass players of all time.

During his career with Cream, which included other members like Eric Clapton and Ginger Baker, he served as the bass guitarist and sometimes vocalist for the band, After a tremendous career with Cream, Bruce embarked on a solo career and played in many other groups. Aside from the bass, Bruce also played the piano, double bass, guitar, harmonica, and the cello.

John Symon Asher Bruce was born to Betty (Asher) and Charlie Bruce, on May 14, 1943, in Bishopbriggs, Lanarkshire. His parents were musicians who frequently moved from one place to the other. This led to Bruce attending 14 different schools. He later attended Bellahouston Academy. Bruce followed the steps of his parents by taking an interest in music.

He played jazz bass in teens. He won a scholarship to the Royal Scottish Academy of Music and Drama, where he studied cello and musical composition.

To support his education, he played in Jim McHarg’s Scotsville Jazz band, which was in contradiction with the academy rules, which frown on students playing jazz. He, therefore, had to leave the college as he preferred playing jazz.

After cutting short his education, Jack Bruce launched a professional music career by touring Italy with the Murray Campbell Big Band, playing the double bass. He joined the Blues Incorporated band based in London in 1962 to play upright bass.

Jack Bruce played the electric guitar during this period. Bruce and Baker had a rocky relationship and had frequent quarrels even on stage. The band later became Graham Bond Organisation and released two studio albums and many other singles. Their releases were not commercially successful.

Jack Bruce left the band in 1965, releasing the solo single “I’m getting tired” under Polydor Records. He later briefly joined Bluesbreakers group, featuring members like John Mayall and Eric Clapton (guitarist). He then joined Manfred Mann in 1966, during which he had his first commercial success with tracks like Pretty Flamingo.

Jack Bruce, Ginger Baker, and Eric Clapton formed the trio Cream in July 1966. The band became popular with tier jazz-inflected rock and blues-rock music. He served as the lead vocalist with backing from Clapton who also acted as the lead sometimes.

Bruce displayed high standard and talent on his Gibson EB-3 electric bass during his days with Cream, making it very famous and having an influence on the likes of Jeff Berlin, Sting, Geddy Lee, and Jim Shaw. He wrote some of the band’s singles alongside lyricist Pete Brown on works including "I Feel Free," "Sunshine of Your Love," and "White Room" among others. Cream disbanded in 1968.

After Cream broke up, Jack Bruce pursued a solo career and collaborated with several other musicians on their projects. He did collaborations in genres including R&B, hard rock, blues, jazz, and fusion among others. His debut solo album Song for a Tailor, released in September 1969, featured Jon Wiseman and DickHeckstall-Smith.

The album was very successful. His recorded works with Hiseman, McLaughlin, and Heckstall-Smith in August 1968, before the disbandment of Cream, was released as his second solo album Things We Liked in 1970. Bruce joined the jazz fusion band featuring guitarist McLaughlin, Tony Williams, and organist Larry Young, for the group’s second album Turn It Over in 1970.

Jack Bruce released his third album Harmony Row which did not meet the success of his first album. His fourth album Out of the Storm was released in 1974 and released A Question of Time in 1989 and Silver Rails in March 2014 among others.

Jack Bruce formed several other groups including West, Bruce & Laing, in 1972, to release the album Live ‘n’ Kickin, 1974, formed another band alongside keyboardist Tony Hymas and drummer Simon Phillips, in 1976 and Jack Bruce & Friends in 1980 among many others. He contributed to works of Jon Anderson, Garry Moore, Cozy Powell among others.

Jack Bruce married twice first to Janet Godfrey in 1964. The couple had two sons Jonas ‘Jo’ Bruce, and Malcolm Bruce, all of whom also became musicians and played keyboard and guitar respectively in their father’s band.

Jo later formed the band Afro Celt Sound System. Bruce married his second wife Margrit Seyffer in 1982 and had two daughters Natasha, (Aruba Red) and Kyla, and a son Corin. Jack Bruce - Composing Himself: The Authorized Biography by Harry Shapiro was released in February 2010. Bruce died on October 25, 2014, at age 71, of liver disease in Suffolk, England.

Jack Bruce's remains were cremated. He was interred at the crematorium after a private family ceremony on December 31, 2014. Jack Bruce battled drug addiction during his career, which made him lose a lot of money.