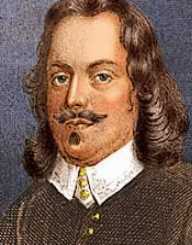 Puritan writer and preacher John Bunyan was born on the 30 November 1628 at Harrowden in the Parish of Elstow, Bedfordshire, England. He was the son of a tinker.

John Bunyan had little formal education and worked with his father learning his trade.

Between 1644 and 1647, John Bunyan was in the parliamentary army. In 1653, he was received into the Baptist Church in Bedford, England. He became a deacon in the church and 1655 he started preaching and became a famous preacher. He did not have a license to preach, and in 1660, he was imprisoned and spent the following twelve years in prison.

After his release in 1672, John Bunyan was appointed the pastor of the Baptist Church in Bedford, and in 1675 he was once again arrested for preaching without a license. He spent six months in prison and was released. The authorities ignored him after this second episode in prison.

Historians have debated as to why Bunyan did not simply agree to stop preaching without a license. As he had a wife and children to support, the question has been asked why he chose to stay in prison. He was not asked to give up his faith and authorities did not see him as a threat, but more as a nuisance.

The Pilgrim’s Progress is regarded as the most brilliant Christian allegory ever written and is one of the most published books in the world, having been translated into numerous languages.

In the early days, Protestant missionaries regarded it as second only to the Bible. As well as being a preacher and the author of Pilgrim’s Progress, Bunyan was the author of numerous other books.

John Bunyan married in 1649, and his first wife died in 1655. After her death, he moved to Bedford and in 1659, he remarried. John Bunyan died on the 31 August 1688 in London, England. John Bunyan had five children, but there are no descendants alive today.

By 1940, over a thousand editors of the Pilgrim’s Progress had been printed. In 1830, a biography appeared written by Robert Southey. Writers such as Charles Dickens, George Bernard Shaw, and Louisa May Alcott all paid homage to the John Bunyan’s Pilgrim’s Progress.