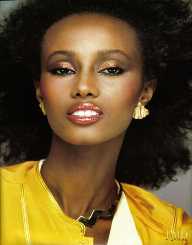 As her father was a diplomat and ambassador, the family moved around due to his work. During her childhood, Iman spent her early years in Somalia with her grandparents. Later she went to school in Egypt, where she attended high school and studied at university in Nairobi, Kenya.

Her primary and high school education took place in Egypt. Iman Abdulmajid later enrolled at the University of Nairobi, Kenya to study political science (1973). Her father was working in Kenya during her university years.

Iman Abdulmajid was scouted by photographer Peter Beard while at university in Kenya; and she was encouraged to move to the United States. After moving to the US, Iman made her modeling debut with Vogue in 1976.

Designers quickly noticed her stunning looks and Iman Abdulmajid was soon a sought after and busy model. Some of the best photographers of the day worked with her, including Annie Leibovitz and Helmut Newton. From the mid-1970s through to the late 1980s, Iman worked as a model, and was an inspiration, for designers such as Calvin Klein, Yves Saint Laurent, and Versace.

In the mid-1990s, Iman Abdulmajid developed a cosmetic line based on formulations she had designed to suit her skin tone. The enterprise was a success. Iman’s foundations are favorite and have a market share which enables the business to turnover US$25 million annually. In 2012, Somali fashion designers Ayaan and Mohallim of Mataano were appointed to serve as brand ambassadors for Iman’s cosmetic line. The Home Shopping Network in the US went into partnership with Iman to develop a clothing line.

Since 2007, the products have sold well, and Iman’s Global Chic continues to be successful on the Home Shopping Network. These products include clothing, cosmetics, and accessories.

Iman Abdulmajid appeared in some television shows in the 1980s, including Miami Vice.

In 1992, she became the first person to kiss Michael Jackson on film in the video Remember the Time; she appeared in the video game Omikron: The Nomad Soul with David Bowie. In the mid-2000’s she hosted Project Runway Canada and in 2010, hosted the second season of The Fashion Show. Film appearances include Out of Africa (1985), No Way Out (1987), Lies between Twins and Star Trek VI. In The Linguini, David Bowie also had a role. Iman was also in Exit to Eden (1994).

Iman Abdulmajid was a supermodel during the from the mid-1970s, retiring in 1989. She went on to be a successful businesswoman and has used her fame to assist organizations such as Save The Children.

In 2007, Iman Abdulmajid won a won a Gemini Award for Project Runway Canada.

In 1992, Iman Abdulmajid married British rock star and legend David Bowie. The couple had one child, a daughter Alexandria. Iman also has a daughter, Zulekha Haywood, from a previous relationship. She has a stepson, Duncan Jones, from Bowie’s first marriage. Bowie died of cancer in January 2016. Before her wedding to Bowie, Iman had a brief marriage to a man in Somalia (m.1973-divorced 1975). She was then married to Spencer Haywood (m.1977-divorced 1987). Haywood is a former American professional basketball player.

Iman Abdulmajid is a Muslim.

Iman Abdulmajid has long been concerned with women’s rights in third world countries and has used her fame to highlight issues facing women in these countries. As an ambassador for Save the Children, she has helped raise awareness of the work they do. Organisations she has been involved with include the Keep a Child Alive programme, the Children’s Defense Fund, and the Enough Project. The Enough Project concerns itself with the global trade in minerals, and she was involved in the campaign to end blood diamonds. To this end, Iman terminated a contract she had with diamonds giant De Beers, on ethical grounds.