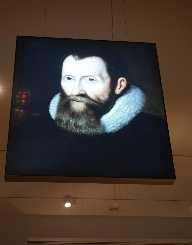 John Napier was born on February 1, 1550. He was a Scottish mathematician and a physicist. He is popularly known as the inventor of logarithms. He was a Christian and a staunch Protestant. He died on April 4, 1617.

John Napier was born on February 1, 1550, in Merchiston Tower, Edinburgh, Scotland. He was born to Sir Archibald Napier who was a wealthy landowner and Janet Bothwell. He was also known as Jhone Neper a Latinized name. He received his early education at home from private tutors. He underwent his formal education at St Salvator’s college and St Andrews. His interest in theology developed while he was in the college.

In 1571, John Napier returned to Scotland after he travelled to Europe for further education. In 1572, he inherited the estates of his family. In 1574, he bought a castle in Gartness. He was involved in mathematics research during his free time. He was also an ardent protestant where he was engaged in religious controversies. In 1594, he published a spiritual work ‘Plaine Discovery of the whole Revelation of Saint John.’

In 1608 after the death of his father, John Napier moved to Merchiston castle, Edinburgh where he stayed for the rest of his life. In 1614, he published “Mirifici logarithm canonisdescriptio” a Latin version where he discussed logarithms which was later translated to English by Edward Wright. He also had Napier’s Rules of Circular Parts where he discussed theorems in spherical logarithms.

In 1615, John Napier collaborated with Henry Briggs, a prominent English mathematician with whom he worked with on the concept to come up with a revised table. In 1617, he published “Rabdologiae, seu Numerationis per Virgulas Libri Duo” where he described an innovative method of multiplying and dividing with small rods in a device known as John Napier's bones due to the bone-like appearance.

In 1572, John Napier married his first wife Elizabeth with whom he had two children. In 1579, Elizabeth died. He then married Agnes Chisom with whom they had ten children. He died on April 4, 1617, in Edinburgh in Scotland. He died at the age of sixty seven.