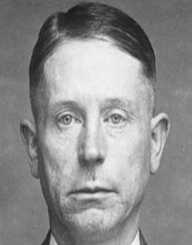 German serial killer Peter Kurten was born into poverty in Cologne, Germany on the 26 May 1883. He was the eldest of thirteen children, and the family lived in one bedroomed flat.

His father was a cruel alcoholic who brutalized his children and raped his wife in front of them. By the age of 9, Kurten was involved in a relationship with a man who lived in the same apartment block who introduced him to bestiality. During his childhood, two of his friends died in a drowning incident which was thought to be an accident, Kurten later claimed to have drowned the boys.

Peter Kurten abused animals including dogs, sheep, and goats. At sixteen, he left home and around the same time his father was arrested and jailed for an incestuous relationship with his teenage daughter. Kurten was in and out of jail for various petty crimes until May 1913 when he committed his first murder, a young girl Christine Klein.

The murder remained unsolved for many years. When World War I broke out (1914-1918), Kurten joined the German Army. He deserted the army but was caught and spent the duration of the war in jail. In 1921-1925 he was living in Altenburg, married and worked in a factory.

Peter Kurten moved with his wife to Dusseldorf, and during that time he attacked four women and also became an arsonist (1925-1928). In 1929 he attacked and murdered a young girl, Rose Ohliger. From then onwards he went on a killing rampage (1929-1930), striking females of all ages.

Around this time his crimes were referred to as the Vampire of Duffeldorf. After he raped a woman, Maria Budlick, but allowed her to go free, police were able to track Kurten down. Kurten fled but managed to convince his wife that he was the Vampire of Dusselford and that she should be given the reward offered for leading to his capture. He was subsequently captured and confessed his crimes,  Kurten was put on trial and found guilty of nine murders. He was executed by guillotine on the 2 July 1931.

Peter Kurten was interviewed by Dr. Karl Berg and was the subject of Berg’s book The Sadist. Kurten’s head was mummified, and his brain revealed no abnormalities, apart from an enlarged thymus gland.

The mummified head is now in possession of the Ripley’s Believe or Not! Museum in Wisconsin. Various plays and films have featured Kurten’s crimes including Normal (2009) and the play Normal: The Dusselford Ripper. He was also the subject of The True Story of Serial Killer Peter Kurten (2016) by C.L. Swinney.