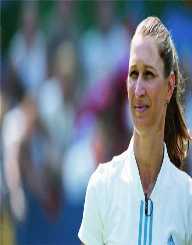 Stefanie Graf was born on June 14, 1969, in Mannheim, Germany. Her parents are Heidi and Peter Graf. Both of her parents were also professional tennis players. She also has a brother named Michael. She later began going by the nickname Steffi, which is the name she is best known for now.

Steffi Graf first began playing tennis when she was just a child. Her first tennis coach was her father. Over the years, she continued to play the sport, and it wasn’t long before she was competing in junior tournaments in the 1980’s. She began her professional tennis career when she was only a teenager.

In the earliest parts of her career, Steffi Graf was anything but a star player, but that is to be expected. As she continued to practice and compete, she rose through the ranks. In her first year, she was only ranked 124th, but only a few years later, she was in the top ten.

In the mid-1980’s, she began to compete in competitions all over the world. Steffi Graf was soon playing the US open and in WTA tournaments. She won and lost her fair share of games, but she never gave up. Sadly, for a while in the mid-1980’s, she had to take a break from playing tennis, as she suffered an injury. Once she was back in the game, she quickly returned to winning matches. She even won the French Open finals.

In the late 1980’s and throughout the early 1990’s, Steffi Graf continued to tour around the world, competing in various tennis competitions, including tournaments in the United States, France, and Australia. Around 1992, Graf hit a rough patch in part due to injury and age. She lost the several competitions around this time. However, once she recovered, she joined the Olympics for the second time, which she did well in.

From 1993 to the end of the 1990’s, Graf’s game was varied. Steffi Graf had both winning and losing streaks. One of the things that made her lose some skill was an injury caused by a stabbing. However, she didn’t let the traumatic event slow her down. Once she was recovered, she continued to play tennis. Over the next few years she would suffer other injuries that would hurt her game for a short time, and her form for a longer time. She had to skip several matches because of her injuries.

Near the end of the 1990’s, it was clear to both Graf and her fans that her professional tennis career was coming to an end, both because of her injuries and because of her many recent loses in competitions. 1999 was an especially tough year for Graf, as Steffi Graf won many games, but lost many as well. At the end of this year, Graf retired from professional tennis. She was only 30 years old when she retired.

After her retirement, Steffi Graf continued to play in various games, mostly with World Team Tennis. She did several of these matches between 2005 and 2010. These competitions were for charity. She and her tennis partner/husband, also played many doubles matches for charity.

Over the entire length of her career, Steffi Graf won more matches than she lost, earning over 500 match wins for herself.

In 1984, Steffi Graf participated in the Olympic games in Los Angeles. At this time, tennis was only a demonstration sport. However, she still competed valiantly. She earned an honorary gold medal during this year’s Olympics, but she did not earn a “real” goal medal since tennis was only a demonstration sport. Soon after this year’s Olympics, tennis became a sport in which a “real” medal could be earned.

Graf returned to the Olympics in 1992. By this time Germany was unified [it had been since 1990], so she was on the German team, as there was no West Germany team. Steffi Graf again competed in the Women’s singles and doubles competitions. She earned second place in the singles competition, which also earned her a silver medal. However, she was ninth place in the doubles, which did not earn her a medal.

All of Graf’s awards are due to her excellence in tennis. Some of her awards (excluding the ones previously mentioned) are listed below.

Steffi Graf has also won some prestigious tennis tournaments. These awards are listed below.

Steffi Graf was inducted into the Tennis Hall of Fame in 2004.

She was ranked as the #1 women’s tennis player for over two years in a row, and over seven years in total.

In 1998, Steffi Graf founded her charity, Children For Tomorrow. This charity works to help which who are caught up in violent situations and places, including places affected by war. The charity often donates money to hospitals. Other major recipients of this charity’s funds include child refugees, children who have experienced the loss of family members, and children who have PTSD and other mental conditions. In 2011, the charity got a new headquarters at the University Hospital Hamburg-Eppendorf. The foundation’s most recent projects have been mostly in African countries, including Uganda and Eritrea.