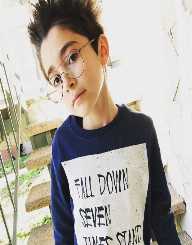 Nicholas Bechtel is a young American actor born on February 15th, 2005. He is famous for his 2013 role in General Hospital starred as Spencer Cassadine. His other major role was in the Underdog Kids (2015).  He also featured in Stuck In The Middle from 2015 as Lewie Diaz. He is currently at Extra TV of NBC as a correspondent.  He is a talented kid and Adam Levine the famous American singer couldn’t agree more.

He described Bechtel as “A Genius”.  He has a warm personality exhibited by some of his hilarious interviews.  His sense of humor is unbelievable for a kid his age. This has gained him much popularity among other celebrities. He rose to fame at such a young age and hence has a bright future for sure. He began his acting career in 2013.

Nicholas Bechtel was born on February 15th, 2005 in the USA. He currently lives in Los Angeles and has an elder sister. As of his parents, no much information is known about them.

Nicholas Bechtel was hardly 8 years old when fame knocked on his door. A new dawn to a successful career had just begun for the boy. He was cast in General Hospital aired on ABC Television Channel. In this show, he was featured as Spencer Cassadine which the audience greatly accepted. He, therefore, became quite famous among his fans.

He has a role in Stuck in the Middle where he stares as Louie Diaz. The show is hosted by the Disney Channel. The audiences have also received this act with open arms, taking the young actor into further heights of his career.

Nicholas Bechtel works on full-time basis at Extra TV of NBC as a correspondent aside from his roles in TV soaps. The Extra TV show is hosted by none other than the famous Mario Lopez. The young actor is not new to the Red Carpet appearances either.

Initially, before Bechtel became famous, he was featured in a few shows. These include his role as Max Leon in the premiere season of Rake. He was also cast as Young Jordi in the show Red Band Society. Unfortunately, these two shows were canceled before they were released. This explains why Bechtel did become a famous actor yet he is known to be among the best young actors presently.

One word describes Nicholas Bechtel; “Genius” just like Adam Levine put it. His sense of humor comes quite naturally to him. It is like he always knows what to say to make his audiences burst into laughter. He is a flexible actor who can act anything from a lighthearted TV show to an intense soap opera. This diversification is exemplary given his age. This leaves one wondering what he can do when he is much older. Time will tell for sure.