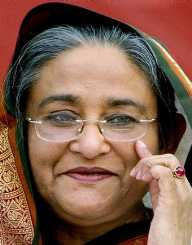 Sheikh Hasina Wazed, the serving Prime Minister of Bangladesh, in office since 2009, was born in Tungipara, East Pakistan (now Bangladesh) on September 28, 1947, a few months after the Independence of the Indian Subcontinent from the British rule. She is the eldest child of Sheikh Mujibur Rahman, a freedom fighter and great leader instrumental in achieving independence from the misrule of Pakistan and Sheikh Fazilatunnesa Mujib.

Bangladesh (East Pakistan at that time) was passing through a violent, turbulent time during the early period of Hasina’s life. She studied at Dhaka University and also took part in student politics in the 1960s. Her father was repeatedly imprisoned during this time, and she assumed the responsibility of communicating with her father’s associates.

Bangladesh fought for its independence throughout the second half of the 1960s and made a declaration of independence from Pakistan on 26th March 1971. A civil war broke out between the West and East Pakistan after the proclamation.

East Pakistan defeated West Pakistan on December 16, 1971, with the active help of Indian Military Contingents in the last few weeks of the war. Pakistan, finding no escape route, agreed to recognize the independent state of Bangladesh.

Sheikh Hasina’s father Sheikh Mujibur Rahman, who was kept in detention in Pakistan during the war, became the first President of Bangladesh after being released forthwith. Tragedy struck Sheikh Hasina on August 15, 1975.

Some rebel Bangladeshi Military Officers assassinated her father, mother and three brothers in their Dhanmandi home in the outskirts of the capital Dhaka. Hasina and her sister Sheikh Rehana got saved as they were in West Germany. Consequently, she went into a lonely exile for the next six years.

In 1981, Sheikh Hasina came back to Bangladesh to lead the ‘Awami League Party.’ But her arguments and strong opinions about restoring democracy landed her in prison. She was continuously put either under house arrest or imprisoned throughout the following decade. Her Awami League Party participated in the 1986 parliamentary elections held under the martial law promulgated by the then military ruler General Ershad.

Sheikh Hasina was the opposition leader during 1986-87 as her main rival Begum Khaleda Zia, and her Bangladesh Nationalist Party (BNP) boycotted the election citing the martial law. General Ershad was unseated in 1990 following a mass uprising against his autocratic governance.

On 30 June 1996, parliamentary elections were held under a neutral caretaker government for the first time after suitably amending the constitution to facilitate such transition. Sheikh Hasina Wazed won the election and became the Prime Minister of Bangladesh for her first term. She completed her full term as Prime Minister in the history of Bangladesh unprecedentedly.

In the 2001 general elections, the four-party alliance led by the ‘BNP’ secured a landslide victory with a two-thirds majority and went on to form the next government. In her second term as opposition leader, increased violence and atrocities including murder attempts against her partymen was the order of the day. Sheikh Hasina, herself survived an assassination attempt on her in 2004. A grenade attack on a gathering in Dhaka on 21st August 2004 caused the death of 21 Awami League Party supporters including some prominent leaders.

In July 2007, Hasina was arrested on frivolous charges of extortion and murder. But her extortion trial was suspended by the Dhaka High Court and subsequently ordered her release on bail. Again a graft case was filed against her by the Anti-Corruption Commission. She was ultimately released on parole on 11 June 2008. Immediately she flew to the United States for urgent medical treatment of her complications of high blood pressure, hearing impairment and eye problems.

Sheikh Hasina returned to Bangladesh again on 6 November 2008. She participated in the ensuing Ninth Parliamentary General Election held on 29 December 2008. Her Bangladesh Awami League along with 14 other parties formed a ‘Grand Alliance’ and became victorious securing a two-third majority.

The signing of the ‘Chittagong Hill Tracts Peace Accord’ in December 1997 is regarded as the most remarkable achievement of Sheikh Hasina’s turbulent career. It is a peace agreement between Bangladeshi government and the ‘Parbatya Chattagram Jana Sanghati Samiti.’ The Samiti is an association of some armed people with a political background. The Peace treaty strived to end decades of violence, confrontation, and hostility between the tribes of the region and the Bangladesh Government.

Sheikh Hasina married M.A. Wazed Miah, a distinguished Bengali scientist, in 1968. Her husband died on 9 May 2009. They had a son and a daughter from the marriage. Her son, Sajeeb Wazed Joy joined her in the Awami League as one of the functionaries and remained active in politics after that. Her daughter, Saima Wazed Hossain Putul lives in Canada. Sheikh Hasina is ranked at 59th place among the ‘100 Most Powerful Women in the World’ according to the latest Forbes’ list.