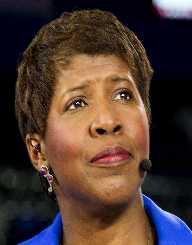 Hailed as one of the most powerful African-American women who graced the media as an anchorwoman, Gwen Ifill is also an accomplished journalist and author.

Ifill never married nor did she have any children. She died at the age of 61 due to cancer on November 14, 2016, in Washington DC.

The Upbringings Of A Child Of A Minister

Gwen Ifill was born on September 29, 1955, at Queens, New York and. Her father, Urcille Ifill Sr. worked as a minister in the African Methodist Episcopal and was a native of Panama with a Barbadian lineage. Her mother was Eleanor Ifill also shared the same lineage and homeland. Due to her father’s ministry, Ifill and her family often traveled to different locations exposing the young girl to the ways of the world. Growing up, she lived in several locations such as New England, Pennsylvania, and Massachusetts, before finally setting in at New York as a result of her father’s work.

Ifill attended Simmons College located in Boston, Massachusetts and attained a bachelor’s degree in communications upon her graduation in 1977.


An Opportunity At Boston Herald-American

Ifill fulfilled her internship at the Boston Herald-American who offered her a job as a reporter in their company. In 1981, she transferred to the Baltimore Evening Sun where she got to work on topics involved in politics. Her tenure at the Evening Sun lasted until she transferred to the Washington Post. At the Post, she exerted 5 years of effort until she resigned for “not being ready” for the Capitol Hill. Fortunately, the New York Times saw her skills and hired her instead of where she did the coverage of the White House starting in 1991 until 1994.

After multiple job-hopping at various news platforms, she finally settled as a reporter for NBC in 1994.

Ifill became the pioneer African-American woman to host the PBS program Washington Week in Review on October 1999. PBS was impressed on her analytical skills and journalistic prowess that she was also hired as a senior correspondent in the NewsHour with Jim Lehrer.

She also became the first African-American female to moderate a number of political debates. The first of the debates was between the vice presidential campaign of Dick Cheney and John Edwards in 2004, and again in 2008 between the campaign of Joe Biden and Sarah Palin.

Along with Judy Woodruff, the two of them became not only co-anchors but co-managing editors of the NewsHour which makes them the first anchorwomen in the history of national TV.

Besides her journalistic and media coverage, Ifill also authored a book published in 2009 entitled The Breakthrough: Politics and Race in the Age of Obama as well as a holder of 15 other honorary degrees credited under her name.