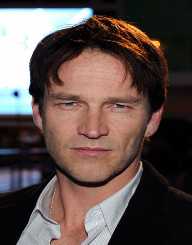 After competing with thousands of performers out there, Stephen Moyer is now a notable actor. Not only did he rise to stardom too soon, but he has also earned several accolades under his name. He also fell in love while in show business with Anna Paquin. Moyer has appeared in countable of films including Undiscovered, 88 Minutes, The Starter Wife, and Devil’s Knot.

From afar, Stephen Moyer carries a notable sense of humor, and that’s what drives him to accomplish his goals. Even when motivation is at its peak, he will never miss a chance to help others. Moyer is a mentor to many. His friends and family marvel at his kindness and love. He’s always surprised when he hears that many consider him as his best friend. His social skill and persistence pave the way for a successful career in various fields.

On 11th October 1969, Stephen Moyer was born in Essex, Brentwood, England. Moyer spent his childhood life performing at a nearby church. Being an active choirboy, he was enlisted as the leading teen of the choir. It wasn’t long that he got signed for a school play where he continued to perform. He completed various series and films. Stephen first attended Ingrave Johnstone Primary School then St. Martins School and later joined Academy of Music and Dramatic Art.

Moyer has a sister called Amanda. His maternal parents called it quit and remarried while he was still young. Spending his childhood days with his mother in Herongate and Ingrave, he loved playing soccer, tennis, and rugby. After performing and honing his acting skills, nothing stopped Stephen from pursuing what he loved the most. There and then, he moved to Hollywood to advance his career.

After Stephen Moyer's graduation from LMDA, his first job was to work in the music industry. He did this for three years followed by others companies such as the Royal Shakespeare Company and Stratford.  He then took a leading role in Romeo and Juliet with a touring production.

Moyer did loads of theatre roles, but his career later transitioned into TV roles. He first appeared in a TV sitcom called 'a crime against television.’ Other incredible roles followed in British Television. Major shows include The Grand, Empathy, and Men Only, NY-LON, Five’s, Menace, Lilies and Walking the Dead.

After some time Moyer made several screen appearances starring different roles. He was mostly seen in Prince Valiant, Quills, and Entrusted films. US Television movies include Princess of Thieves, Uprising, and The Starter Wife. FOX dramas are NSA Innocent and True Blood.

After struggling for over a decade, Stephen Moyer can proudly utter that he has made it. His life today defines him as a prominent actor. He rose to stardom since 2000 with ‘Quills’ film followed by Undiscovered 2005, 88 Minutes in 2007 and the Starter Wife.

When it comes to his personal life, Stephen Moyer had a relation with Loren Haynes that gave birth to two children. The duo parted way, and he later married Anna Paquin in 2010. They currently reside in Los Angeles together with their four kids: Poppy Moyer, Charlie Moyer, Lilac Moyer, and Billy Moyer.