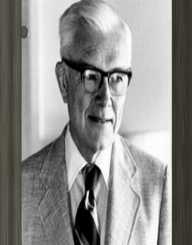 Kenichi Fukui was born on October 4, 1918. He was a Japanese theoretical chemist. In 1981, he won the Nobel Prize in Chemistry. He was the first scientist from Japan to win a Nobel Prize in Chemistry. The works that are attributed to him assisted in the reduction of the gap between practical chemistry and physics and mathematical theories that influence the behaviour of atoms and molecules. He was known for using complex mathematics to support his studies and research.

Kenichi Fukui was born on October 4, 1918, in Nara City in Japan. He was born to Ryokichi Fukui who was a foreign trader and Chie Fukui. He was brought up alongside two brothers. He was interested in chemistry since he was young. He enrolled in the Department of Industrial Chemistry at the Kyoto Imperial University. In 1941, he completed his graduation from the university.

After graduating from university, Kenichi Fukui was involved in experimental research at the Army Fuel Laboratory in Japan during the Second World War. In 1943, he became a lecturer at the Department of Fuel Chemistry at Kyoto Imperial University. In 1945, he was promoted to the rank of assistant professor. In 1951, he became a full professor. He mostly researched quantum chemistry, chemical reaction theory, and physical chemistry. In the 1950s, he, however, started coming up with theories regarding the role of electron orbitals in molecular reactions. He coined the term ‘frontier orbitals’ which referred to the highest occupied molecular orbital and the lowest unoccupied molecular orbital. His theory was published in the Journal of Chemical Physics which was titled ‘A Molecular Theory of Reactivity in Aromatic Hydrocarbons.’

In the 1960s, Kenichi Fukui worked in the area of theoretical chemistry where he used advanced mathematics. He also developed the statistical theory of gelation, polymerization kinetics and organic synthesis by inorganic salts. In 1982, he became president of the Kyoto Institute of Technology. He held the position until 1988. In 1988, he became the Director of the Institute for Fundamental Chemistry until his death. He also authored more than one hundred and thirty papers on topics which focused on reaction engineering, catalytic engineering, and experimental organic chemistry. His works were published in Japanese journals and papers. He also worked on English publications related to his research and studies on organic synthesis by inorganic salts, catalysts, statistical theory of gelation, chemical relations and polymerization kinetics.

In 1962, Kenichi Fukui received the Japan Academy Medal. In 1981, he received the Nobel Prize in Chemistry jointly with Roald Hoffman. In 1988, he received the Grand Cordon of the Order of the Rising Sun awarded to him by the Japanese Government. He was inducted into the Royal Society as Foreign Member in 1989. He was also a member of the Royal Institution of Great Britain and European Academy of Arts among other societies. In 1983, he became the President of the Chemical Society of Japan, a post that he held up to 1984.

In 1947, Kenichi Fukui married Tomoe Horie with whom he had two children, Tetsuya (son) and Miyako (daughter).  He took his last breath on January 9, 1998, at Kyoto in Japan. He died at the age of seventy nine.