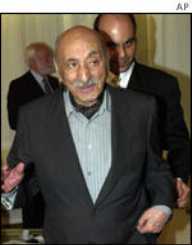 Mohammad Zahir Shah was an Afghan King and is best known as the last king of Afghanistan who was later named, Father of the Nation.

Zahir Shah was born on 15 October 1917 in Kabul, Afghanistan. His father was Mohammad Nadir Shah who was a member of the ruling Muhamadzai family. The family Zahir Shah was born into the claimed descent from Saul and the tribe of Benjamin as described in the Quran, Bible, and Torah. His father was the head of the Afghan Army and became the King of Afghanistan in 1929. Zahir Shah’s father had been born in British India following negotiations between the British and Afghanistan had seen his grandfather and great-uncle sent to India as hostages by his great-grandfather.

Mohammed Zahir Shah received his early education at Habibia High School in Kabul. He later moved to Montpelier in France to study at the Pasteur Institute. On his return to Afghanistan, he entered the infantry academy of the Afghan Army and became a privy councilor and minister of war for his father’s government.

Mohammed Zahir Shah succeeded his father in 1933 after his father was assassinated. For most of his rule, Zahir Shah left the running of his country to his uncles. During this time Afghanistan joined the League of Nations, and diplomatic and trade links had been established with some western nations. Zahir Shah supported the First East Turkestan Republic with troops and weapons. However, all were lost when Chinese forces retook control of the area following the Battle of Yarkand. Afghanistan remained neutral during the Second World War and following its conclusion Zahir Shah sought aid from the United States of America and the Soviet Union to help Afghanistan modernize. He began to recruit foreign advisors and set up the country’s first university.

Mohammed Zahir Shah took more direct control of ruling Afghanistan in 1963, and the following year he had the country’s constitution drafted. This saw the introduction of free elections and human rights guaranteed by Afghan law. Despite these measures, Afghanistan was racked by tribalism and factionalism and centralized rule, and modernization attempts did not expand far outside of Kabul. In 1973, Zahir Shah went to Italy to undergo eye surgery and while out of the country his cousin, Mohammed Daoud Khan, held a coup against his rule.

A republic was set up and rather than risk a civil war, Zahir Shah abdicated and lived in exile. During the Soviet invasion of Afghanistan Zahir Shah held talks to form a government in exile, but nothing ever came of this. An attempt was made on his life in 1991 by a knife-wielding assassin. Following the end of the Soviet invasion, it was the view of the majority of factions in Afghanistan that Zahir Shah should return as a unifying figure. However, the Pakistani government not wanting a potential enemy developing a strong, stable government instead backed the radical Islamic group, the Taliban. This led to a civil war that only ended with the American invasion of Afghanistan and the removal of the Taliban from power.

Mohammed Zahir Shah returned to Afghanistan in 2002 and was involved in the formation of a new government. Such was his popularity in Afghanistan he was forced by the Americans to announce that he would not take a leadership position, so the preferred American candidate, Hamid Karzai, could take the presidency. He was given the symbolic title, Father of the Nation, in the new Afghan constitution.

Mohammed Zahir Shah married his first cousin, Humaira Begum in 1931 and together they had nine children. He died on 23 July 2003 after a long illness.